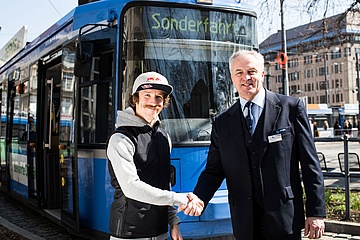 Five years ago, the Wings for Life World Run united the world in a global charity event for the first time. Since then, the run, which sees hundreds of thousands of participants around the world start at the same moment to run away from the Catcher Car - the moving finish line - has grown bigger and more atmospheric every year. The starting signal will be given next year on 06 May at exactly 1 pm (11 am UTC). Whether in Munich, or at one of the locations worldwide, alone with the app or at an organized app run - everyone can take part in this run, no matter where they are.

Exactly six weeks before 10.Germany's ultrarunner Florian Neuschwander from Frankfurt completed a special kind of training in the Bavarian capital yesterday: in the middle of Munich - from Lenbachplatz to the St. Emmeran stop - Flo ran an 8.7-kilometre route in a race against the Munich public transport company's Tram 16. In the best conditions, the long-distance runner came out just ahead despite the short distance and was able to win the kick-off to the Wings for Life World Run.

The special thing about the Wings for Life World Run is not only that 100 percent of the entry fees go to the Wings for Life Foundation and thus to spinal cord research. The format is also unique: tens of thousands of runners all over the world will set off at the same time on May 6 (1 p.m. CET) and will continue to do so until they are lapped by the moving finish line, the Catcher Car. So for Flo Neuschwander, running against the tram was a special challenge and perfect training in equal measure: "The principle is similar to the Wings for Life World Run, because the <x>ampersand</x>sbquo;being chased' spurs on top athletic performances," says Flo Neuschwander, who was able to get a head start at the beginning of the race thanks to the tram's regular stops, giving him the edge. After the halfway point, things got tight for him again, because Flo also had to obey the traffic regulations and lost valuable time due to several red lights. Nevertheless, in the end it was enough for the victory: "At the end it became really exciting. I gave everything and the almost 9 kilometres were great fun. Everyone who wants to experience this should definitely run on May 6."

In addition to his best performance of 83.49 km, Flo Neuschwander looks back on two national Wings for Life World Run titles. The ultrarunner has big plans for 2018, he last ran to the top in Munich in 2016: "The Wings for Life World Run is a fixed date for me. A unique race format and incomparable atmosphere. I enjoy that very much. I want to run at the front this year!"