In the sign of human rights: Paulskirche glows blue
from FFM Aktuell 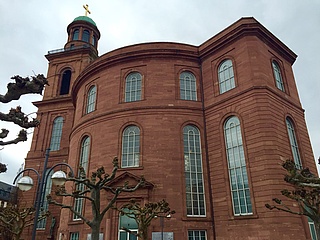 (kus) "All human beings are born free and equal in dignity and rights. They are endowed with reason and conscience and ought to treat one another in a spirit of brotherhood."

December 10 marks the anniversary of the adoption of the UN Declaration of Human Rights, Article 1 of which is quoted here - it was adopted in 1948. On various continents, outstanding, internationally renowned buildings shine in blue, the colour of the United Nations, to mark this anniversary. Frankfurt's Paulskirche - the only building in Germany - is also setting an example for human rights, humanity, peace and solidarity. And shines together with the Empire State Building in New York, the CN Tower in Toronto, Taipei 101 in Taipei, the Opera House in Sydney and many more.

"On December 10, organizations around the world commemorate the Universal Declaration of Human Rights - we want to be there, too," says Ulrike Klinke-Kobale of the Human Rights Watch Committee Frankfurt, which initiated the light spectacle. "And what better building to do it in than our Paulskirche?" The idea came about six weeks ago. Klinke-Kobale quickly found partners to make it a reality. She was also able to quickly convince Lord Mayor Peter Feldmann to let Paulskirche shine.

"Our Paulskirche is the symbol of democracy in Germany. It makes me proud that it is the only building in Germany to be bathed in blue on Human Rights Day to remind us of 10 December 1948 and of what is no less important today: human rights, which are the basis for peaceful coexistence. They apply to all people and yet are ignored in many places. We should be aware of this - on Human Rights Day and on every other day," says Lord Mayor Peter Feldmann. "I thank the Frankfurt Committee of Human Rights Watch and all supporters for this great action."

The event technicians of Art Evolution Service (AES) illuminate the Paulskirche on December 10 with 220 battery-powered pig lights. Which is no easy feat, as Benny Coppik of AES explains: the red sandstone from which the landmark is built absorbs the blue light. For the lighting professionals, this means turning up the lights and adding a lot of color. "We set up a ring of lights around St. Paul's Church in the morning, even before the Christmas market opens. We position some of them in the Römer, others on Berliner Straße. As dusk falls, they start to shine - more and more, so the blue becomes more and more intense." MBF-Filmtechnik, the company Polyma and Wisag also support the action