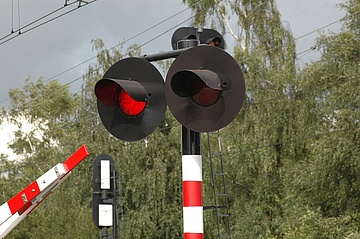 For a long time, the level crossing at Oeserstraße in Frankfurt-Nied has been considered a real nuisance with a high potential for danger. Again and again in the past it came to long waiting times and dicey situations. The tragic death of a 16-year-old girl in May 2020 was the sad highlight. Action is now finally being taken - at least that was promised at a local meeting to which the citizens of Frankfurt-Nied invited the head of the transport department of the city of Frankfurt am Main, Klaus Oesterling, and the Deutsche Bahn Group representative for Hesse, Dr. Klaus Vornhusen. The City of Frankfurt am Main and Deutsche Bahn presented their joint plan of action for the level crossing. In three stages, the level crossing is to be removed and replaced by a passenger underpass and overpass for vehicle traffic.

The first stage is to renew the entire level crossing safety system. By 2021, the entire technology will be renewed and a traffic light system will be added as an additional safety measure for road users. From December 2021, the Oeserstrasse level crossing will then be controlled together with the light signal system by an approaching train. This means that the barriers will thus close automatically and the local barrier guard will then issue the final clearance after inspection.

In a second step, the construction of the passenger underpass as a separate measure is then to be carried out earlier than planned. Simplified building permit procedures should help, among other things, that the underpass for pedestrians and cyclists can already be put into operation by 2023/2024, which would further ease the traffic situation at the level crossing.

Stage three then provides for the final elimination of the level crossing. To this end, the planning of the road underpass is to be accelerated and planning law brought about so that it will be available in less than ten years. The implementation will be financed by rail and city funds.

With the aim of shortening planning, approval and construction processes, DB and the city have formed a joint task force. This is intended to speed up both short- and medium-term solutions. In order to simplify the traffic situation for road users, the city is also looking into changing the traffic routing.

Let's hope that all these measures will be implemented in a real and timely manner and ultimately help make the traffic situation at this location safer for everyone.