User survey: What should your New Year's Eve 2020 look like?
from FFM Aktuell 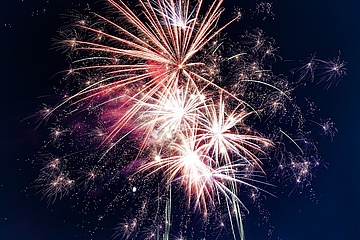 There is now the question: how will New Year's Eve 2020 be celebrated so that it doesn't become a superspreader event? Can it even be prevented from turning into big parties and debauched family celebrations? Here - as so often in recent months - each and every individual is called upon. Certainly: this year we have already had to do without very, very much. And it is hard not to celebrate the change into a hopefully better year with all the people you would like to have around you. But there are plenty of ways to make this New Year's Eve special and beautiful, without it having to have dramatic consequences for the beginning of 2021.

Have a nice dinner in a small circle - classic with raclette or fondue -, talk on the phone or skype with other dear people, watch "Dinner for One" together, unpack some classic games again, look into the future with wax casting (since lead casting has been forbidden for a while) or unpack your current favorite songs and dance around the apartment (this can be really fun even with five people) - there are so many traditional or even fancy ways to celebrate the turn of the year.

Now it's your turn: With your help, we would like to collect lots of ideas to make this New Year's Eve in its special form unforgettable for all of us (and not in a negative sense). We look forward to all suggestions and tips from you, which we will then publish in time before the turn of the year in a big special. Write us what ideas you would like to share for New Year's Eve 2020 with the Frankfurt-Tipp users under the keyword "New Year's Eve" to marketing@trifels.de

We are happy about every contribution!