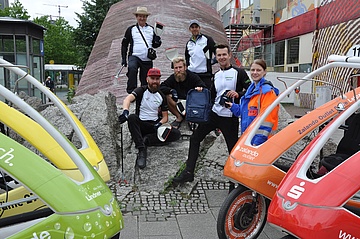 (ffm) For 15 years, the e-mobile Frankfurt Velotaxis have been in use as environmentally friendly service providers on their routes around Frankfurt City. A bicycle taxi driver covers up to 5000 kilometres per season. During daily maintenance, broken tubes are often mended or tires are replaced. Especially on weekends and during the many city festivals, there is a lot of broken glass on the bike paths and sidewalks. A quick evasion is not always possible for the velotaxis in some places and so they and the many other professional and recreational cyclists suffer from carelessly discarded bottles or broken glass.

Velotaxi Frankfurt owner Matthias Graf had the idea to equip ten of his 22 vehicles with dustpan and broom and to become FES cleanliness sponsor, as he says: "to sweep the glass from the bike path quickly". Velotaxi and FES have known each other for many years through joint activities in the association Umweltforum-Rhein-Main. Graf signed the FES sponsorship certificate for Velotaxi on Wednesday, June 13. "We are pleased that Velotaxi is committed to being a cleanliness sponsor. The employees often see nuisance trash in the bike lanes sooner than we are out cleaning the streets in the district. That's a great support," says FES spokeswoman Stephanie Pieper. That's why FES equipped the Velotaxis with dustpans, brooms and protective gloves. "This makes it easier for our drivers to sweep broken glass from the bike paths during their rides," says Matthias Graf. "We would be happy if we can use this to reduce the number of broken bicycle tubes of all cyclists a little."