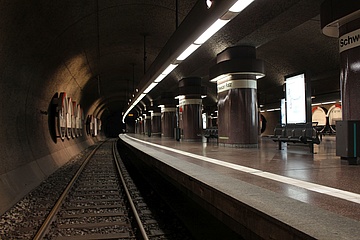 Since Wednesday, the hard lockdown has been running with the aim of ensuring that as many people as possible stay at home and many contacts are avoided. But even if there are now significantly fewer people on the road overall, the VGF does not plan to restrict its services. This means: subways and buses will continue to run as planned and at full capacity. This is to ensure that passengers in subways and trams continue to be offered as much space as possible, since the 1.5-meter distance in local public transport can not be guaranteed.

Neither will the general hygiene concept of the VGF change. This includes the disinfection of neuralgic places in the interiors of the trains. During the nightly breaks, handles, door buttons and hand loops will be carefully disinfected so that VGF can guarantee to have "clean" underground and tram trains on the track at the start of each day's operations.

As part of the #GESUNDHEITHATVORFAHRT campaign, VGF has installed a UV module in an escalator at the "Leipziger Straße" station, whose UV light combats germs, viruses and bacteria on the handrails. The test was so successful that VGF will equip all new escalators to be installed in the future with such a module. In 2021, a total of twelve installations are due for renewal at the stations "Bockenheimer Warte", "Zoo", "Alte Oper" and "Leipziger Straße", all with UV module for the first time.

As part of #GESUNDHEITHATVORFAHRT, the VGF has tested or is still testing further measures: disinfection dispensers are currently being tested, of which the VGF has installed 20 in the inner-city stations Hauptwache, Konstablerwache, Südbahnhof, Willy-Brandt-Platz and Dom/Römer. A trial with the coating of frequently touched places in elevators - handrails, handles, buttons - was unsatisfactory, the VGF will not pursue this approach further.

Then, on January 1, another innovation will be implemented: RMV has included the obligation to wear mouth and nose coverings in the Common Conditions of Carriage (GBB), which are also valid in Frankfurt's subways and trams. This means that from the beginning of the new year, VGF can levy the contractual penalty of 50 euros provided for in the GBB in the event of checks. Previously, such a violation was a misdemeanor regulated by the Hessian Corona state ordinance. This meant that only police and regulatory authorities could issue the penalty. In recent weeks, the VGF and the police have carried out joint checks in trains and stations to emphasize the obligation to wear masks. Joint mask checks are also to take place from January 1.

Since the conditions of carriage only apply to the vehicles, VGF has also adapted its usage regulations in the underground stations as of January 1. Also here the mask carrying obligation is included, also here the VGF with beginning of the year a penalty for the offence at a value of 50 euro can impose.

According to observations of the VGF, however, the mask obligation is observed by a large part of the passengers. During a joint check with the city police on 15 December over a period of three hours (17 to 20 o'clock) on A and C route only two offences were punished.