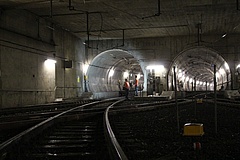 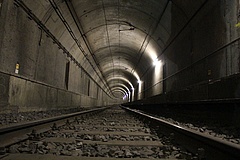 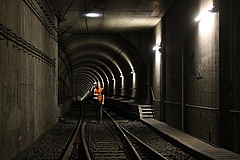 Frankfurt's head of transport Klaus Oesterling is relieved: Not only that the work on parts of the "A route" (U1, U2, U3 and U8) and the eastern section of the "C route" (U4 and U7) will be completed on schedule, so that the VGF can resume subway service next Monday, August 12, 2019. "There have also been virtually no complaints," Oesterling says happily during a press tour of the underground tunnels. In the articulated buses, which were brought to Frankfurt from various German states to act as rail replacement transport, the mood would always have been very relaxed and the traffic collapse feared by many has fortunately failed to materialize.

On the tour through the tunnel, which led from the turnaround area at Südbahnhof to Hauptwache, it became clear how many small and larger works had been carried out in recent weeks in order to be able to continue to guarantee (as far as possible) trouble-free operation on Frankfurt's busiest underground line. To this end, the VGF had bundled various works on the so-called "A line" and therefore shut down the four lines for six weeks at a stretch. On the "C route" were preparatory work of HessenMobil at the Riederwaldtunnel reason for the closure, here the VGF has used the time but also for own work.

The bundling of the work and the closure in one piece would also be much better accepted by the citizens than if it comes again and again to shorter closures. The fact that extensive information about the closure had already been provided in the spring and that these were regularly supplemented with important updates had also contributed to the fact that the subway users had been well prepared for the six-week closure and that there had been no major chaos.

Completed work on the "A line"

One of the biggest challenges, especially in the tunnel area, was the replacement of several switches. In the section between Südbahnhof and Miquel-/Adickesallee, the VGF replaced a total of ten switches: four each at the stations "Willy-Brandt-Platz" and "Miquel- / Adickesallee" and two at Eschenheimer Tor. This included the dismantling and reinstallation of the point control systems and the train protection system. No easy undertaking, but it was completed on schedule.

During the tunnel run, another aspect of the work was also made clear, something that passengers don't usually get to see. Because the VGF in the six weeks, in which on 7 days the weeks 24 hours a day was worked, also the electrical infrastructure in the tunnel renewed. In the process, more than 32,473 meters of power and data cables with cross-sections between 50mm&sup2; and 150mm&sup2; were installed, plus 20,000 collector brackets were drilled into the walls, which in turn required the use of more than 1,000 masonry drills. Because: the special drills wore out after about 20 drillings into the hard reinforced concrete of the tunnel walls. 120 metres of concrete duct were newly laid in order to lay cable crossings under the tracks; between Südbahnhof and Willy-Brandt-Platz, cables were laid in existing cable troughs, which in turn required more than 5,000 cover plates of these troughs to be moved. 140 tons of material were brought into the tunnel by VGF for this work with five fully loaded work trains, and conversely more than 15 tons of old material (old cables, lights, etc.) were driven out of the tunnel.

With more than 140 tons of material as well as ten switches or switch parts, also weighing tons, that had to be installed in the narrow tunnel, construction site logistics played a crucial role. VGF work trains - pulled by a battery-operated locomotive, as the electricity on the line was switched off - brought the material to the tunnel construction site partly "just in time", partly cables and other equipment were also stored on the platforms of various stations before the work began.

When the ten points were installed, there was a time window for the transports, which were not allowed to interfere with the following work. The hub of the logistics was the VGF's Central Infrastructure Workshop (ZWI) on Hanauer Landstrasse. From here, the work trains travelled via "Hanauer", Konstablerwache, Friedberger Landstraße, Glauburgstraße, Eckenheimer Landstraße, Marbachweg and Dornbusch into the "A track" tunnel. Tracks like in Glauburgstraße or Marbachweg, which are not used by regular trains but connect different underground and tram routes, are therefore essential for the VGF and cannot be dismantled.

Work on the infrastructure for the digital BOS radio was another part of the six-week closure. BOS is a non-public radio service used by authorities and organisations with security tasks, i.e. fire brigades, police as well as rescue services.

The VGF underground stations have numerous water connections. For example, there are toilets in the facilities that are used by employees. Public toilet facilities, such as those on the B level of the "Hauptwache" station, are not serviced by VGF.

In the "Südbahnhof" station, VGF installed two new escalators during the closure; at the "Schweizer Platz" station, work has begun on installing a new system.

VGF has also carried out various works on the above-ground section between Alleenring and the branches north of the Heddernheim depot:

- Replacement of a total of seven points, via which the Heddernheim depot can be approached from the main line.

- Renewal of the sleepers in the Hügelstraße turnout system.

- Renewal of a section of track between Heddernheim depot and the "Sandelmühle" station; VGF has also installed a rail wetting system here, which will significantly reduce travel noise in the curve.

- Renewal of tracks, sleepers and track bed is on a total of 750 meters between Heddernheim and Weißer Stein. In the process, the VGF has moved more than 2,000 tons of soil and track ballast.

- Twelve kilometers of rails that wear out under operation have been reprofiled by VGF, which means they have been ground with a special machine.

- Five crosswalks that allow crossing the tracks on the above-ground section at Dornbusch, Weißer Stein, Hinter den Ulmen, Am Lindenbaum and Hügelstraße were renewed by VGF during the six weeks of the closure.

- Refurbishment of overhead line poles: All 83 poles between the tunnel mouth and the "Heddernheim" station received a new top coat. On 27 of them, VGF renewed the corrosion protection in the lower part where the mast extends into the ground - usually the critical point of these masts.

- Cables for the traction current supply were replaced or renewed. On the one hand due to the adjustment of the installations to current guidelines, on the other hand the exchange served the planned traction current upgrade, i.e. the increase of the voltage from 600 to 750 volts.

- In this context, worn parts of the contact wire were replaced in the same section over a length of about nine kilometers.

Somewhat in the shadow of the "A route" was the closure of the eastern section of U4 and U7, which was also not used by subways for the duration of the summer holidays. The VGF also used buses between the stations "Schäfflestraße" and "Enkheim". The reason for the closure was preparatory work by HessenMobil on the Riederwald tunnel by laying cables. Apart from the mishap on Tuesday, in which power lines were either disconnected or damaged, this work, which was not the responsibility of VGF, also went smoothly.

VGF used the temporary shutdown for its own work on the tracks along Borsigallee, namely the renewal of two crossings, the pedestrian crossings and the replacement of 600 rotten wooden sleepers between Flinschstraße and Enkheim. In addition, the track in this section was regravelled and tamped.

The U4 and U7 lines will also return to service when operations begin on 12 August.

The VGF has even increased its workload in the course of the work and "managed" more than originally planned:

- So in the station "Schweizer Platz" with the replacement of another escalator was started. Although it is not yet ready for use with the start of operations on Monday, the closure break was used for the most important work.

- The installation or replacement of 18 kilometers of BOS and fiber optic cables was planned, but in total the VGF has newly installed 55 kilometers.

It goes on Until Monday morning, VGF still has a lot to do: On Thursday, test runs took place in Heddernheim, where the seven switches were replaced that connect the depot to the main line. On Friday, the overhead contact line was checked. On Saturday, there will be a test run over the entire line, initially with one train, followed by a "stress test" in which four four-car trains will run over all the routes affected by the work in order to prove that they are in working order. On the same day, the final test runs will also take place on the "C line" to put U4 and U7 back into service. Extensive shunting operations on Sunday will ensure that all trains can run according to schedule on Monday. For example, trams were parked in the old depot Eckenheim, which must now be transferred back to the depot East.

Also the fire department used the past few days to visit the tunnel section and without the ongoing operation to get an idea of possible locations.

Thanks to the passengers

.The VGF thanks not only all the workers, some of whom gave up their vacation and slaved at all hours of the day and night to complete all the work in the nevertheless very small time window of six weeks. Sincere thanks also go to the passengers for their patience and understanding during the extensive work and its consequences. The VGF will thank its passengers with a small gift on Monday at the station "Hauptwache".