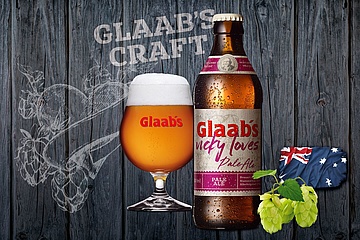 A new coup for Glaabsbräu, the oldest brewery in southern Hesse and one of the most modern breweries in Germany. Already at the beginning of the year, the seasonal mixed beer drink "Glaab&acute;s Grie Soß" could convince all along the line. Now, on the occasion of this year's craft beer fair at the end of November in Mainz, an exotic interpretation of the craft beer genre "Pale Ale" was launched with the new craft beer "Vicky loves Pales Ale". For the first time in Hesse and hardly known in Germany, Glaabsbräu uses the Australian hop "Vic Secret", which gives this beer fruity aromas. Again, a special taste experience is guaranteed!

The introduction of Glaab&acute;s Vicky loves Pale Ale comes in response to customer requests. "Many of our customers kept approaching us asking why we didn't create a Pale Ale," points out Julian Menner, 1st Brewmaster. "Even though Pale Ale is now a well-known craft beer genre in Germany, we wanted to put our usual creative touch. That's why we decided on a hop that gives our Pale Ale a special fruity exotic note and is hardly ever used in Germany: Vic Secret, from Australia," added Julian Menner.

"The craft beer fair in Mainz with over 4,000 visitors was an ideal opportunity for us to present our new craft beer and gather feedback from consumers. The feedback even exceeded our expectations!", adds Robert Glaab, Managing Partner.

The craft beer is a great flavour match for the burger and therefore meets a continuing consumer trend. Vicky loves Pale Ale is available in the Euro bottle 0.33L in retail and gastronomy. Thus, Glaabsbräu expands with "Hopfenlust" and "Reifeprüfung" your craft beer range to three craft beers.

While Vicky loves Pale Ale is brewed just as sophisticated and special as all the beers of Glaabsbräu: Individually according to their own recipe, with natural hops and free of additives, chemical stabilizers and color beer, all of which are allowed in the purity law