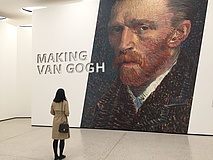 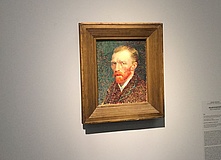 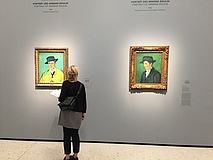 There are long queues outside the museum guaranteed again: Starting Wednesday, the Städel will thrill visitors with a comprehensive exhibition on Vincent van Gogh and his influence on other important artists. Alexander Eiling, Head of Modern Art, Städel Museum, and curator of the exhibition, was aware of the importance of this show from the start; after all, with 50 central works by van Gogh, it is the most comprehensive presentation of the painter's works in Germany for almost 20 years. At the same time, he was also aware of the difficulties he, his predecessor and co-curator Felix Krämer, now General Director of the Kunstpalast, Düsseldorf, and the entire team would face in planning and realizing the exhibition. For most of the works are on loan from other museums, where these are major works that these houses are naturally reluctant to do without.

Nevertheless, they succeeded in getting this major exhibition off the ground. For Felix Krämer, it was important to be involved in this show even after his time at the Städel, because an exhibition of such size and importance is actually curated only once in a lifetime. The enormous response at the press conference proved him right, and at the same time showed that all the efforts made over the last few years had paid off. Making van Gogh" is sure to attract media attention and a large number of visitors - and rightly so. Divided into three chapters that extend through a total of 13 rooms in the Städel Museum's basement, the exhibition traces the emergence of the "van Gogh myth" around 1900 and the significance of his art for modernism in Germany.

The van Gogh success story is closely linked to the Städel. In 1908, the Frankfurt museum was one of the first to acquire the painting Farmhouse in Nuenen (1885) and the drawing Potato Planter (1885) in order to build up a modern art collection through the Städelscher Museums-Verein. Three years later, one of van Gogh's most famous paintings, Portrait of Dr. Gachet (1890), came into the museum. Its acquisition, but unfortunately also its later loss, are documented in detail in the exhibition.

In addition to important works by van Gogh, which also show his development as an artist and the influence of other artists on his work, the exhibition asks how it came about that van Gogh became so popular, especially in Germany. Who became involved in his work and how did artists react to him? The exhibition shows van Gogh as a key figure in the art of the German avant-garde and thus makes a decisive contribution to understanding the development of art in Germany at the beginning of the 20th century. The Städel brings together more than 120 paintings and works on paper in the exhibition. The core of the exhibition consists of 50 central works by Vincent van Gogh from all creative phases. On view are outstanding loans from private collections and leading museums worldwide. The influence and impact of van Gogh on the following generation is illustrated in the exhibition by 70 works by German artists, including well-known names such as Max Beckmann, Ernst Ludwig Kirchner, Alexej von Jawlensky, Paula Modersohn-Becker and Gabriele Münter as well as rediscovered positions by, for example, Peter August Böckstiegel, Theo von Brockhusen, Heinrich Nauen and Elsa Tischner-von Durant.

"Without van Gogh, German art history of the 20th century would have been completely different. Groups of artists such as Die Brücke or Der Blaue Reiter owe their essential impulses to van Gogh's paintings. The aim of our exhibition is to reveal these connections and to make visible van Gogh's pioneering importance for modernist art in Germany," says Felix Krämer about "Making van Gogh", which will be shown on over 2000 sqm<x>ampersand</x>sup2; of exhibition space in the garden halls of the Städel Museum from 23. October 2019 to 16.02.2020 to see.

In addition to a very extensive catalog, which can be recommended to every admirer of the art of van Gogh to the heart, still a colorful program for adults and children is offered. Studio courses, art colleagues, a look behind the scenes, evening tours, family tours or panel discussions will be offered in the coming months. In addition, there is an audio guide narrated by actor Lars Eidinger, which is available as a free app for your smartphone or can be borrowed on site. Furthermore, the site https://vangogh.staedelmuseum.de/ offers even more digital offerings that are perfect for preparing your visit to the exhibition.