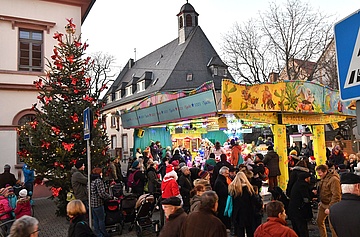 (kus) On the weekend, December 3 and 4, the thirty-sixth Schwanheim Christmas Market took place. A market organized by the Vereinsring Schwanheim on a voluntary basis and designed by volunteers from the local associations.

"District Christmas markets are always something special," said Mayor Peter Feldmann. "A good opportunity to spend an atmospheric time together with friends, neighbours, family." He thanked all the players for their voluntary efforts. "Such a market lives from the commitment of the associations and creates cohesion in the district."

This year's Christmas market was once again held under the motto "Give me your hand for life". Vereinsring boss Willi Becker, who organises the Schwanheim Christmas market as market manager, once again took on this special challenge. The premature baby ward 14.2 of the University Hospital Frankfurt was able to collect 4,350 euros at the last Christmas market. "We are pleased that everything went well again this year and that the lighting could also be financed from donations again. Next year, I would like to see even greater participation from the local shops."

The second largest district Christmas market in Frankfurt captivates with its special atmosphere. Alt-Schwanheim appeared again this year in Christmas splendor. More than 100 stalls came together, transforming the main street of Schwanheim and Alt-Schwanheim into a beautiful festive mile