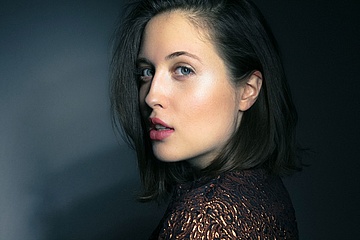 The W-Festival celebrates great female musicians and strong voices. In 2019, the music festival, which has now become a permanent fixture in the cultural calendar of the city of Frankfurt, will once again take place at various locations. From 29 May to 1 June, Lola Marsh, KOVACS, Grossstadtgeflüster will join the prominent line-up of the 2019 W-Festival. They join the already confirmed national and international artists such as Alice Merton (photo), Namika, Bonnie Tyler, Suzi Quatro, LOTTE, ELIF and Younee. In addition, another attractive venue has been found, which means that the festival will not only create a buzz in Frankfurt. With the development of the Schlachthof Wiesbaden could

for the first time also the Hessian state capital in the multi-day live music event to be integrated. This will take place in 2019 under the patronage of Frankfurt's head of culture, Dr. Ina Hartwig, and will once again place a special focus on the role of women in the music business: "Nowadays, no one will doubt that music is not a purely male affair. But the W-Festival shows what that means in a positive way by bringing together an impressive density of brilliant female musicians in one place. I am very glad that this place is Frankfurt! In its cultural and artistic diversity, the festival is an ideal fit for our city," Hartwig said of the special role the festival plays not only in Frankfurt, but throughout Germany.

Musically, the eighth edition of the W Festival will be opened on 29 May by Lola Marsh. With their summery, upbeat folk-pop single "Wishing Girl" from their debut album "Remember Roses", Yael Shoshana Cohen (vocals) and Gil Landau (guitar, keyboard) not only conquered the German charts in 2017, but also entered the international radio playlists. And also at the Frankfurt guest performance, the band relies on the magnetizing effect of their melancholic, tender indie pop. In the Ignatz Bubis-Gemeindesaal, the hub of Frankfurt's Jewish community, Lola Marsh from Tel Aviv enchant the

audience with a lot of charm, lightness and the power of soft tones. The Israeli duo's show marks the extension of a collaboration that began in 2018: "We are looking forward to continuing the successful cooperation that began in 2018 with Ute Lemper," says Marc Grünbaum, board member and head of culture at the Frankfurt Jewish Community. "Lola Marsh has been on our wish list for a while and appeals especially to a younger audience, whom we are happy to invite to join us at the Jewish Community Frankfurt."

Newcomer "KOVACS" was already part of the line-up four years ago and is convincing live all along the line: "It's your own fault who missed it!" was the verdict of "RBB" recently after a Berlin performance by the Dutchwoman, who will bewitch the audience at sankt peter on 30 May. Sharon Kovacs launched an international career in 2015 with her phenomenal debut album "Shades Of Black", during which she has so far collected 60 million YouTube views for singles such as "My Love", "The Devil You Know" or "It's The Weekend". Her 2018 sophomore album, "Cheap Smell," also breathes that tense future soul that makes concert performances by the shaved-headed singer with the velvety dark voice a program highlight.

As the third new signing of the second wave of female artists, Grossstadtgeflüster will inaugurate a new festival venue on May 30. After opening up Bad Homburg as a performance venue, W-Festival is tying up another location just outside Frankfurt with the Schlachthof Wiesbaden, anchoring the festival even more firmly in the entire Rhine-Main region. Everyone is invited to the Grossstadtgeflüster concert in the Hessian capital, which can also be attended with the W-Festival ticket, if it's up to the Berlin electro-punkers: "Anyone can come" is the title of "GSGF"'s current tour and they also provide suitable tips for concert preparation: "Think about what you're going to wear, it should be comfortable and quick-drying, gather your family and friends and let the house burn together with the three horns on stage. Because one thing is for sure, no dance leg will be left dry!"

Another slot in the festival program is still waiting to be assigned. In the context of "WELLEN SCHLAGEN", the young talent competition of the WFestival in cooperation with the Frauen Musik Büro Frankfurt / Melodiva, young female solo artists and bands fronted by women have the opportunity to apply via the platform "gigmit" for a short time only. The winning application will not only receive a performance on the Sparkassen Open Air stage, but also a festival fee and the prospect of further professional support. Application deadline for the young talent casting, for which more than 350 applications have already been received, is already 20 February 2019.

Information on the young talent competition and the current line-up can be found, as well as the overall programme, at <link http: www.w-festival.de _blank>www.w-festival.de

In addition to individual tickets, a non-transferable festival ticket is also available this year, which entitles you to attend all club shows and concerts at the Alte Oper on a first come first served basis. All tickets include free travel to/from concerts on public transport within the Rhein-Main-Verkehrsverbund.