Wedding in the Römer: Bäppi said YES
from FFM Aktuell 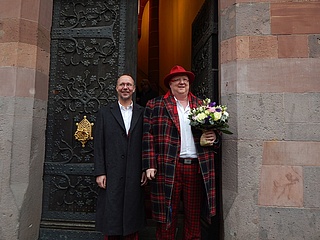 The 08th of January is an important date for Thomas Bäppler Wolf, in Frankfurt better known as Bäppi La Belle, and Carsten Wolf. On January 08, 2000 the two met and on January 08, 2010 they said "yes" to each other for the first time. What was previously a registered partnership, now became - again on 08 January - a marriage. Accompanied by family, friends, colleagues and members of the press, Thomas Bäppler Wolf and Carsten Wolf exchanged vows in the Römer. Even though marriage for all is a matter of the heart for the couple and also a serious matter, a little Bäppi-typical humour was of course not to be missed. So the guests on the Römerberg were greeted with a hearty "I don't feel like it, but a promise is a promise", after the couple drove up in style in an old Mercedes built in 1961.

That Bäppi and Carsten are made for each other, both are convinced. Therefore it was absolutely clear for them also in the moment, when the marriage for all was decided, that they want to marry now once again properly. "Carsten is the exact opposite of me," says Thomas Bäppler Wolf about his husband. He is calm, even-tempered and level-headed - and thus the ideal partner for the Frankfurt original Bäppi. And for Carsten Wolf, a trained industrial clerk, it is above all his very special sense of humour that makes his life partner so lovable.

For Lord Mayor Peter Feldmann, who introduced the wedding ceremony with a few words, the wedding of the two is a perfect fit for romantic Frankfurt. Even if many people from outside would not believe it, the Frankfurt people are characterized by the fact that they seek the closeness of others not only at Christmas time. Affection and love know no boundaries, of which the couple is a very good example. The mayor's congratulations, which followed a quote from Goethe, were also echoed by the numerous guests, who then gathered for a small celebration in the Historical Museum.

And Frankfurt-tipp.de also wishes the two only the best for their future together, which will hopefully offer you many more beautiful moments like this very special 08.01.2018. All the best!