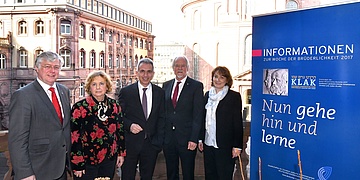 (kus) Lord Mayor Peter Feldmann: "Since 1952, Societies for Christian-Jewish Cooperation have organized the Week of Fraternity nationwide every March. On March 5, the central opening ceremony will take place in Frankfurt. The highlight will be the presentation of the Buber-Rosenzweig Medal to the Conference of Regional Church Working Groups of Christians and Jews (KLAK). I can think of no better place than Frankfurt and our Paulskirche, the symbol of freedom, democracy and self-determination. We are happy to support the organization of these central celebrations, because our city wants to live up to its reputation as a cosmopolitan, tolerant metropolis and city of diversity in the long term. Frankfurt will once again demonstrate its hospitality. Participants can look forward to a wide range of impressions of a modern Frankfurt, shaped by people from 180 nations, peaceful coexistence and lived, diverse recognition of cultural and religious diversity."

Rudolf W. Sirsch, Secretary General of the German Coordinating Council of the Societies for Christian-Jewish Cooperation: "With its impulses, the Week of Brotherhood makes a significant contribution to understanding between Jews and Christians in Germany. With its numerous events, it sets an example for peaceful coexistence in respect and tolerance. The Week of Brotherhood is a synonym for lively cooperation between Christians and Jews in Germany, a place for building bridges between religious convictions, even beyond Christianity and Judaism. It is a call and a reminder for universal human rights, for the commitment to human dignity and tolerance. We are all reminded during Fraternity Week that we must actively participate to ensure peaceful coexistence in our society."

Rev. Friedhelm Pieper, Protestant President of the German Coordinating Council of Societies for Christian-Jewish Cooperation: "The Conference of Regional Church Working Groups Christians and Jews - an association of working groups, committees and commissioners in the field of Church and Judaism within the 18 regional churches of the Evangelical Church in Germany, established in 1978 - will receive the Buber-Rosenzweig Medal for its services to Christian-Jewish dialogue during the opening of the Week of Fraternity 2017 in Frankfurt. For decades, the KLAK has dedicated itself resolutely and competently to coming to terms with church hostility towards Jews in theology and practice. It actively participated in the elaboration of corresponding church declarations on the relationship of theology and church to Judaism, and for the most part also initiated them. In this way, KLAK succeeded in making a decisive contribution to the reorientation of the relationship between Christians and Jews in the Protestant Church in Germany. With the award of the Buber-Rosenzweig Medal to the KLAK just in the Reformation Year 2017, a group is thus to be honored as a laureate that is not only representative of the reorientation in the relationship between Jews and Christians in the Protestant Church in Germany, including a renunciation of Luther's statements hostile to Jews, but has itself made significant contributions to it."

The 2017 annual theme of the Societies for Christian-Jewish Cooperation is "Now Go and Learn." The annual theme, which goes back to a saying of the Jewish scribe Hillel, wants to make clear that learning is to be understood as an ongoing mission. The motto thus underlines - also and especially in Christian-Jewish dialogue - that it is not enough to persist in what has once been recognized and achieved, but that these are always to be deepened and renewed in an ongoing process of learning.