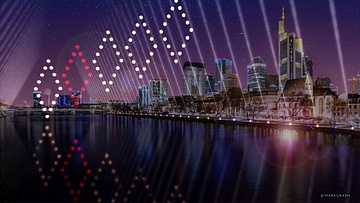 Great joy among the responsible persons of Tourismus+Congress GmbH and Atelier Markgraph. The drone show, which was presented at the grand opening of the new Old Town in late summer 2018, has been awarded the silver BrandEx Award in the category "Planning, Craft, Production". Not the first prize for "Sternenbilder - Eine Symphonie für die Frankfurter Altstadt": The show had already won an award, the Red Dot Design Award, in December 2019. The BrandEx Award is presented annually on the occasion of the International Festival of Brand Experience at the Dortmund Exhibition Centre for particularly successful live communication.

At the so far unique show in the sky of Frankfurt, 100 LED drones merged above the Main River together with light effects, specially composed music and voice passages to form a multimedia homage to our beautiful city. In the narrative centre of the choreography, which took place above the nocturnal Main between the Iron Bridge and the Untermain Bridge, there were outstanding personalities and figures of the city as well as formative events and landmarks.

The show was an excellent event in the truest sense of the word. We congratulate all those who were involved in its creation for this beautiful award!