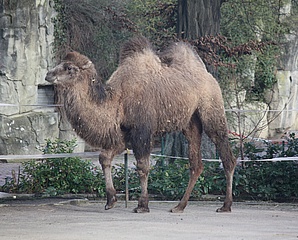 For a few months, Bactrian camel HIRA was alone on the camel enclosure. Since Thursday, February 13, she is kept company by the eleven-month-old ARYA, who came to the Main on Wednesday from the Thuringian Zoopark Erfurt.

In August 2019, the 21-year-old camel mare EFRAH had to be euthanized. She suffered from severe arthrosis. Through the close cooperation of the zoos, a new roommate for the 18-year-old HIRA could be found quickly. The almost one-year-old Bactrian camel mare ARYA arrived in Frankfurt yesterday at noon from the Erfurt Zoopark and was immediately allowed onto the camel enclosure. There she will live together with HIRA and some dwarf goats.

"The keeping of Bactrian camels at Frankfurt Zoo has a very long tradition. The bactrian camels, which can survive for several days without water and can also eat very thorny plants, have fascinated zoo visitors since the zoo opened in 1858," says Dr. Ina Hartwig, Head of the Department of Culture and Science.

"The large bactrian camels with their physiological characteristics play an important role in our educational work. We are therefore pleased to have found a new companion for HIRA in young ARYA," said Zoo Director Dr. Miguel Casares.

Bactrian camels (Camelus bactrianus) belong to the even-toed ungulates and, within this order, to the camel family (Camelidae). The total population is estimated at over two million, but these are essentially domestic animals. The wild form originates from the dry steppes and semi-deserts of Asia and numbers just about 950 individuals; the population trend is downward. The reasons for this are hunting by humans but also changing environmental conditions. In the red list of the World Conservation Union (IUCN), the wild form is therefore classified as "threatened with extinction".

The mares HIRA and ARYA will not breed in Frankfurt. The camel facility, which dates back to the 1950s, does not allow for the keeping of a breeding group according to current husbandry guidelines. In order to keep a camel stallion, the area would have to be much larger and divisible into different areas.