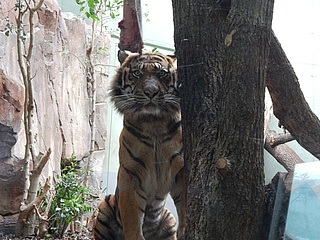 <link https: www.frankfurt-tipp.de ffm-aktuell s ugc herzlich-willkommen-vanni-ein-neuer-sumatra-tiger-fuer-den-zoo.html _blank>As we previously reported, Frankfurt Zoo got an addition to its cat jungle just under a month ago. The six-year-old Sumatran tiger Vanni, born in Rotterdam, came to Frankfurt from the Terra Natura zoo in Benidorm, Spain. After a 30-day quarantine period, the time had finally come: Vanni was brought to his new home in the cat jungle of Frankfurt Zoo. There he will soon meet tiger lady Malea, who has lived alone in Frankfurt Zoo since the death of male tiger Iban almost three years ago. When the two will be brought together depends entirely on the behaviour of the animals. But since Malea has already shown great interest and Vanni has reacted extremely relaxed to the move, the new enclosure and the press pack he was greeted by, the signs at the moment probably point to a reunion soon.

It would be nice, of course, if they then get along as well as Malea and Iban have. After all, their cohabitation has also produced offspring several times - which is an important contribution to the conservation of the endangered Sumatran tigers.

Zoo director Professor Dr. Manfred Niekisch, who together with Dr. Ina Hartwig, Head of Department for Culture and Science, introduced Malea's new roommate to the public, is very taken with the new Frankfurt resident. Not only is Vanni, with his large skull, an extremely beautiful animal. He is also "a very calm but also attentive animal. During the quarantine period he often passed the time by observing the passers-by on the Baroda path. He found it especially exciting when dogs were around. There is now a lot for him to discover in the new facility," said Prof. Dr. Niekisch.

Since it was not yet possible to gauge how Vanni would react to his new home and zoo visitors, the cat jungle remained closed to the public during his move-in. Only staff and press were allowed to be present when the doors opened for Vanni. But after the animal reacted completely relaxed to the new situation, the house will probably be reopened to all visitors as early as noon today. And Malea can rejoice that she won't have to roam the feline jungle alone for much longer. 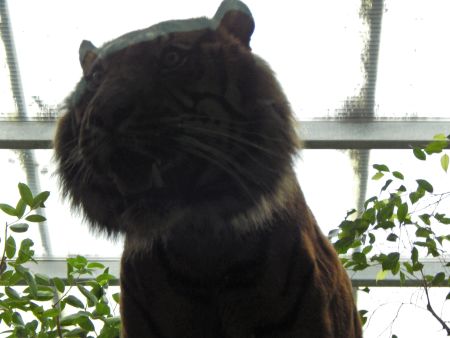