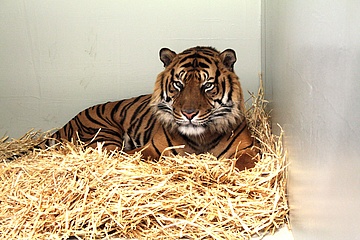 (kus) He arrived on January 30 - Vanni, a six-year-old Sumatran tiger from the Terra Natura Zoo in Benidorm, Spain. For the next few weeks, the tomcat will first spend time in the zoo's quarantine station.

"We still have to be patient for a while before our new male tiger can move into the cat jungle," explains zoo director Professor Dr. Manfred Niekisch, "because first he has to go through the regular quarantine period. If all goes well, the move can take place in early March." Only then will Vanni be available for zoo visitors to see.

The tiger survived the transport by truck in his crate without any problems. Within hours of arriving, he was already exploring his enclosure in the quarantine station. He has also been eating well.

Vanni was born in May 2010 at Rotterdam Zoo. In August 2012, the move to the Spanish zoo Terra Natura took place. "In Frankfurt, the male tiger will initially be kept separately from our 15-year-old female Malea. We first have to see if the two get along. They should have enough time to get used to each other. With regard to the breeding of Sumatran tigers, which are highly endangered in the wild, we will coordinate closely with the studbook coordinator," Niekisch said