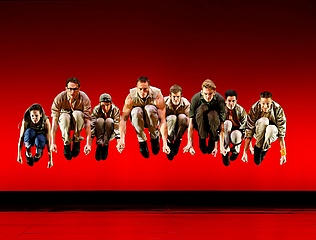 Guest performance April 4-16, 2023 at the Alte Oper in Frankfurt

With provocative finger snapping, the members of the New York street gang "Jets" roam their dusty turf in search of their rivals, the Puerto Rican "Sharks". In the summer heat of the city, passionate Latinas let their skirts fly to fiery mambo rhythms while dreaming of a better life. In the middle of it all: The great love that overcomes borders and prejudices, only to fail in the end - in the Upper West Side, the air vibrates with tension.

Maria, Tonight, Somewhere, America - just a few notes of the world-famous compositions are enough to evoke the gripping visual and emotional worlds of West Side Story, and never forget them again. With the Broadway premiere in 1957, Leonard Bernstein, Jerome Robbins, Arthur Laurents and Stephen Sondheim redefined an entire genre, both musically and dance-wise. Today, West Side Story still stands on its own as the undisputed No. 1 work of American musical theater - bold, realistic and explosive.

Just how uniquely timeless this modern version of the "Romeo and Juliet" story is is proven once again by Steven Spielberg's new theatrical version, which was nominated for seven Oscars in 2022 and won one of the coveted trophies.

Already since 2003, the globally touring production, the only one to feature Jerome Robbins' original choreography, has thrilled more than three million viewers in 28 countries on three continents, including at the Sydney Opera House, Dubai Opera, Paris' Théâtre du Châtelet, Dresden's Semperoper and London's Sadler's Wells Theater.

Now the new international creative team around renowned Broadway director and actor Lonny Price is opening the next chapter in the success story of the musical classic: In mid-December, the rousing new production of West Side Story will begin its next multi-year world tour exactly where it was first seen in Germany on June 15, 1961 - at the Deutsches Theater in Munich! It will be followed by guest performances in numerous German cities until spring 2023, including at the Alte Oper Frankfurt from April 4 to 16, 2023.

Duration: approx. 145 min (including an intermission)

Language: in English (with German surtitles)

Prices: from 32.00 € plus. Fees of the advance booking office

Internet: www.tickets-direkt.de and at all known ticket agencies