What does the future of Schweizer Straße look like?
from FFM Aktuell 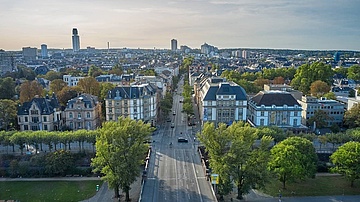 (ffm) People's shopping habits are changing - and with them, inevitably, the character of inner-city shopping districts. The Aktionsgemeinschaft Schweizer Straße is working on finding concepts for Sachsenhausen's main artery and bringing them together in a master plan. Key points: Profile, traffic, offer structure.

"Without a goal, every way is right." Torsten Schiller, chairman of the Aktionsgemeinschaft Schweizer Straße (AGS), makes a point of proceeding with caution around the "Schweizer". "The attractiveness of Schweizer Straße is obvious. This also leads to the fact that many ideas arise about what could and should be done. Good so - on the one hand," he added.

And on the other hand? Tatjana Braun-Siebert, branch manager at Frankfurter Volksbank and also an active AGS member, also warns against "trial and error". "Before we set off for new shores, we first need to have a common vision on the table. And that should also take into account the overall Frankfurt context." Just how much impact experiments elsewhere can have, for example, was painfully experienced by Schweizer Straße during the closure of the northern bank of the Main. Significantly more traffic congestion was the result - the opposite should be aimed for, stresses the AGS. "We need to coordinate and at the same time make our interests heard. So we turned to Economic Councillor Markus Frank, who had an open ear for us and helped us get started via earmarked project funding."

Support from the Economic Department

"A large part of Frankfurt's life happens in the districts, they shape the face of our city, are shopping home for the people who live and work there. So there are plenty of reasons to develop and promote the specific talents of the districts," says Frank, the city's head of economic affairs, adding: "Schweizer Straße is a wonderful shopping street with a lot of tradition and flair that is the envy of many a city, and the Aktionsgemeinschaft Schweizer Straße is the oldest trade association in the city. So we were happy to provide support when the initiative approached us with the intention of working out the burdens and opportunities of Schweizer Straße in order to strengthen it in a targeted way with the resulting findings."

Frank sees the result of the work of the AGS as a valuable contribution - also in the context of the crisis of stationary retail. After all, he says, in addition to online competition, it's also high rents that are making life difficult for retailers.

Of course, Corona prevented much of what was envisioned for last year's 2020. But still, with interviews, roundtable discussions, surveys and analysis, the AGS was able to paint a clear picture of a promising future for Saxony's north-south corridor.

The strategy is in place

"First, quality of life. Second, quality of stay. Third, character. Fourth, short commutes," said AGS chief Schiller, outlining the strategy for the future of Schweizer Strasse. "For the vast majority of respondents, the focal points of their wishes and priorities for Schweizer Strasse lie between these cornerstones." The same is true for other shopping miles, he adds. But the conditions and possibilities differ significantly, so that in the end a very own, distinctive image will emerge.

"Our list of priorities also includes the redesign of Schweizer Platz and a traffic-calmed concept for more pedestrian and bicycle friendliness," emphasizes Schiller. But at the top of the list, he says, is the development of a new supply structure that will ensure the location remains highly attractive tomorrow. "To do this, we have to present ideas to the landlords of commercial space that motivate them to forego maximum demands in terms of rents per square metre. We're all in the same boat: fluctuation and vacancies and a one-size-fits-all mishmash of outlets benefit no one."

Good that the AGS knows City Hall is on its side in these concerns. Councilman Frank has already indicated that he, too, is available for the further discussions that now lie ahead.