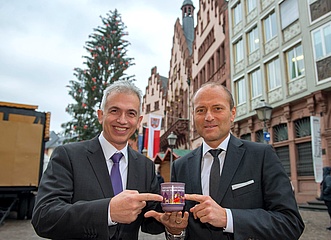 It's that very special time of year again: bright lights create a festive mood, stalls are set up in the city centres and Christmas trees are put up: The Christmas market season has begun. In Frankfurt it starts on Monday, 26 November. Lord Mayor Peter Feldmann will then traditionally open the Christmas market and light up the Christmas tree on Römerberg for the first time. Beforehand, Feldmann and Thomas Feda, Managing Director of Tourismus+Congress GmbH, presented the highlights of the 2018 Frankfurt Christmas Market and the accompanying 2018 mulled wine cup.

"This press conference is always special for me, because it heralds the most wonderful time of the year," Feldmann told the media representatives present. "Frankfurt has one of the oldest and most important Christmas markets in Germany. We are expecting around three million visitors this year. And they come not only from Frankfurt and the region, but also from far away." This year, he said, the new, picturesque image that visitors will see is particularly noteworthy. "For the first time in many years, there will be no construction fence blocking the view, and for the first time our guests will be able to stroll through the new Old Town." The 2018 mulled wine cup also draws attention to this: it shows the coronation path, which runs through the middle of the old town, and a coronation procession interpreted in Christmas style.

The landmark of the Christmas market, visible from afar, is the over 30-metre-high Spessart spruce in front of the Römer. "Our guest of honour this year," said Feldmann with a wink and thanked the city of Schlüchtern. They had donated the tree. Directly under it, there will be a novelty this year: The nativity scene and stage have been redesigned.

Feldmann explained: "For a long time, the Christmas market was reserved for Frankfurt merchants only, the offer was characterized by handicraft goods and typical sweets such as the Beth- and Quetschemännchen. Until the 19th century, parents only bought the toys they put under their children's Christmas tree at the Christmas market." Today, he said, this is much more than a sales market, namely a place to meet and communicate.

Christmas market visitors can romp around 200 stalls this year. The stalls and merry-go-rounds are lined up from the banks of the Main to Paulsplatz and Liebfrauenberg to Friedrich-Stoltze-Platz, where the "Rosa Weihnachtsmarkt" is based. Among others, the German American Community Choir, Swensk Ton, the European Central Bank Choir, the Frankfurt Police Choir and the youth orchestra "Starker Sound" will perform on stage. For December 6, St. Nicholas has announced himself, and on Saturdays and Wednesdays you can listen to the tower brass players from the Altan of the Nikolaikirche at 6 p.m. each day.

On Monday, November 26, the Lord Mayor will officially open the Christmas Market by switching on the more than 6000 lights of the Christmas tree. The opening will begin at 5.05pm with a carillon from St Nicholas Church, followed by a live sing-along concert with the Frankfurt Opera and fanfare from the Altan of St Nicholas Church after the welcoming speeches. The Christmas market continues until December 22.