What's happening at the Museumsufer in 2019?
from FFM Aktuell 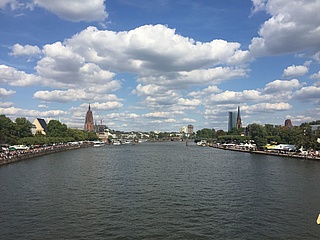 (ffm) Over two million visitors a year, top-class special exhibitions and new crowd-pullers: the year 2018 is coming to a successful close for the Museumsufer Frankfurt and offers several highlights in 2019.

A lot of culture in a small area

"Attractive reopenings and new heads at the helm of some of the houses left their mark on the Museumsufer in 2018," says head of culture Ina Hartwig. "Against the backdrop of a changing society, it is important to keep the houses fit for the future and set them up for new demands." In the surroundings of the newly developed old town, the Museumsufer has continued to develop this year: At the beginning of the year, the former Kinder Museum moved from its interim location on the Hauptwache back to the main building of the Historisches Museum under the new name Junges Museum.

The Schirn Kunsthalle Frankfurt underwent extensive renovation after 32 years and has been shining in new splendor since late summer, and the Kunstverein has received a new, more open-looking entrance as part of the new Old Town development. In the immediate vicinity, the historic heart on the cathedral hill, the KAISERPFALZ franconofurd, became accessible again to the new old town under the town house. In the fall of 2018, the Stoltze Museum moved into its new quarters in the heart of the city, and in 2019 the Struwwelpeter Museum is also scheduled to move into new rooms in the Old Town.

The movement on the Museum Embankment continues in the coming year: In November 2019, the entire complex of the Jewish Museum, consisting of the renovated old building and the extension wing, will open. In the future, this center of Jewish history in Europe will feature the Anne Frank Archive entrusted to it, in addition to a permanent exhibition. The planned Museum of Modern Electronic Music, or MOMEM for short, will be the world's first museum for club culture and electronic music and will in future shed light on the origins of techno on the mezzanine level of Hauptwache station from the summer onwards. "The new openings are among the cultural highlights of the coming year and will attract international attention," says Head of Culture Hartwig with certainty.

2019 marks the 100th anniversary of the founding of the Bauhaus. This is also a reason to celebrate in Frankfurt - under the label "The New Frankfurt", the city developed into a world-famous centre of the avant-garde in the 1920s. In the anniversary year, no less than three municipal museums are dedicating themselves to the legendary metropolitan utopia with the aim of freeing it from the shadow of the Bauhaus: The Museum Angewandte Kunst with "Moderne am Main 1919-1933" from January 19 to April 14, 2019, the Deutsches Architekturmuseum with "Neuer Mensch, Neue Wohnung. The Architecture of the New Frankfurt 1925-1933" from March 23 to August 18, 2019, and the Historisches Museum with "How do people live?". On the Road with the City Lab in the Ernst May Estates" from May 16 to September 15, 2019. For the first time in decades, the MMK Museum of Modern Art was able to secure the artist Cady Noland for a comprehensive show of her works, which will be on view until March 31, 2019. To mark the 100th anniversary of women's suffrage, the Historisches Museum is currently hosting a special exhibition until January 20, 2019.

The Städel Museum is taking on two heavyweights of art history next year with "Titian and the Renaissance in Venice" from February 13 to May 26, 2019 and "Van Gogh and Germany" from October 23, 2019 to February 16, 2020. The Deutsches Filmmuseum is expected to devote itself to a film icon with "Maximilian Schell" from April to September 2019. At the Museum Angewandte Kunst, the exhibition "Contemporary Muslim Fashions" from April 5 to September 15, 2019, is dedicated to the trend consciousness of women in Islam. At the Schirn Kunsthalle Frankfurt, the retrospective on Lee Krasner is a pioneer of Abstract Expressionism in the USA. In addition, various museums will present exhibitions on the guest country Norway at the 2019 Book Fair. On 11 May 2019, the Night of the Museums will once again attract visitors to the museums at an unusual time, and from 23 to 25 August 2019, Europe's largest art and culture festival, the Museumsuferfest, will take place.

The right offer for everyone

The Museumsufer Frankfurt not only offers a lot of culture within short distances, but also has individual offers ready for art lovers and those who want to become one: children and young people under 18 years of age enjoy free admission to the 18 municipal museums. A culture and leisure ticket for children and young people is planned for 2019. The ticket is intended to provide free admission to municipal and non-municipal cultural institutions. It can be applied for free of charge for Frankfurt children and young people up to the age of 18 at the Department of Culture and Social Affairs if their parents have a monthly family income of less than €4,500 net. Families with a higher monthly income can purchase the ticket for a moderate price.

On the last Saturday of every month, Satourday, admission is free for a tour of many museums. Children and adults enjoy special workshops and guided tours.

All 34 houses for one price 365 days a year: that's possible with the Museumsufercard of the City of Frankfurt. Those who still access until 31 December 2018, save 10 euros and get the card still at the old price of 85 euros. For those who like it shorter: with the Museumsufer ticket, you can enjoy the 34 houses on two consecutive days. For more information and prices, visit <link http: www.museumsufer.de _blank>