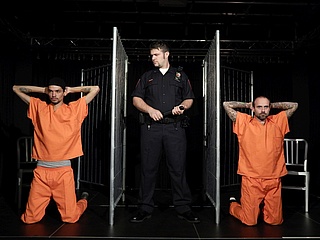 With the play "Der Drecksack mit dem Hut" (The Scumbag with the Hat), Theater Alte Brücke showed two years ago that Broadway theater on the Main can work very well. With an excellent sense of dialogue and timing, Alexander J. Beck, founder of TAB, translated the play by American playwright Stephen Adly Guirgis into German. In doing so, he has succeeded perfectly in retaining the basic mood of the original. At the same time, however, he has made the play, which is tailored to American audiences, accessible to his audience. This also worked really well with Guirgis' second work last season, "Sister Rose". The mix of subtle wordplay and sometimes very heavy drama captivated, entertained and made one think.

With Part 3 of Stephen Adly Guirgis' New York anthology, Alexander J. Beck has now tackled the best, but also the most challenging piece. "Jesus Jumped in Front of the Subway" is the name of the work, which premieres on November 03. Challenging because there is only talking for almost two hours. Not much actually happens on stage, "only" complex dialogues and monologues are delivered at sometimes impressive speed. That must be boring, right? Far from it! Alone the excellently composed sentences create tension and emotions that grab you as a viewer from the very first second. And Beck has once again succeeded in translating them into German in such a way that they seem absolutely authentic and not at all artificial, and thus can unfold their full power in the translation. This impression is further supported by the simple but effective stage design and by the costumes, which are authentic uniforms or prison clothing from the USA.

The play tells the story of Angel Cruz, a thirty-year-old bicycle messenger who had tried to free his best friend from the clutches of a cult. In desperation, he did the only thing that seemed possible - he shot the cult leader, Reverend Kim, in the butt. Now Angel is in jail for attempted murder. His dedicated public defender, Mary Jane, is sure she can get him off without even putting him on the stand. But then Reverend Kim dies on the operating table and the charge is changed to first-degree murder. In desperation, Angel, who has been beaten and raped by other inmates, tries to take his own life. As a result, he is placed in solitary confinement, guarded by the brutal and sadistic warden Valdez. Only for a few moments each day does Angel have contact with fellow inmate Lucius, who has found God in prison. It is a contact that gives Angel support and fundamentally changes his life in prison.

It's tough fare that is served up here. But as with the previous tracks, Guirgis perfectly understands how to lighten up the heavy content a bit and make it more accessible through his dialogue. However, this "lightening" is symbolic of the characters and their actions: Nothing is as it seems at first glance. And so even the occasionally amusing lightness of the dialogues is only a deceptive relaxation, before the audience is again punched directly in the pit of the stomach by the emotional force of the story. Little by little, the many different levels of the characters and the plot are revealed through monologues in which the backgrounds of the individual protagonists are told, or through time jumps. And soon you realize that there are a lot of essential issues here, which are addressed relentlessly open, but nevertheless also very entertaining.

The ensemble really transports the excellent dialogue onto the stage magnificently. All of them leave a lasting impression - whether Stefan Schmidt as Angel, Georg Metzler as the seemingly lionized murderer Lucius, Jan Peter Nowak as the guard who never misses an opportunity to humiliate the prisoners, Sabrina Faber as the public defender disillusioned with her work, or even director Alexander J. Beck as the somewhat too helpful prison guard Charlie. You really hang on the actors' lips and quickly realize: sometimes words are enough to create extreme tension.