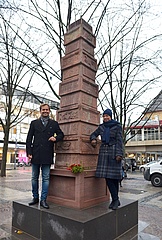 (kus) The White Lily Fountain has found a new home: From now on, the obelisk, the fragment of a classical pump fountain from the late 18th century, decorates the Friedrich-Stoltze-Platz. Head of the Department of Culture Ina Hartwig unveiled the new focal point of the square on Monday, 20 November, together with the head of the local council Oliver Strank and members of the local council 1. The obelisk had been stored in the municipal depot after it had to be dismantled in 2005 in the course of the redesign of Goethe Square.

"I am pleased that the square has received a new gem after the removal of the Stoltze monument. The White Lily Fountain with its red Main sandstone blends in quite wonderfully with the architecture of this square and has thus found a final home near its original location. This means that a part of Frankfurt's history is returning to public space," says Ina Hartwig, Head of the Department of Culture.

Strank adds, "After the removal of the Stoltze monument, the local advisory council will consider whether an appropriate place in the old and inner city near the Stoltze Fountain on the Hühnermarkt can be named after Stoltze. In view of the return of the Stoltze Monument to the Old Town, the Magistrate has also suggested that the previous Stoltze Square be given a different name. However, since this is the very own task of the local advisory council as an overall body, this question of naming the square should then be discussed there with the necessary calm and care."

The sculptor Johann David Voelcker created the White Lily Fountain in 1794 as a classicist pump fountain, whose predecessor was first mentioned in 1390 as Born, according to the Frankfurt Fountain Book. Its eight-metre-high superstructure reached up to the second floor of the corner building in front of which it stood. The basin was framed by four pillars shouldering an obelisk with a vase and a gilded lily. The fountain stood at the entrance to the Fressgass on Comoedienplatz, now Rathenauplatz. It owes its name to the neighbouring house "Zur Weißen Lilie". Here it was in use until 1831. Then it was demolished and its stones either sold or obstructed.

Since then only an obelisk made of red Main sandstone, alternating in embossed and smooth ashlars, remains of the fountain. This was restored in 1983/84 with the financial support of the Kuratorium Kulturelles Frankfurt. In 1990, with the help of the curatorship, it received a surrounding sandstone bench and was re-installed in the centre on Goetheplatz. But even here the fountain did not find its final home: in the course of the redesign of the square it was dismantled in 2005 and stored in the municipal depot.

In the search for a suitable location, the Cultural Office, the Office for the Preservation of Historical Monuments, the Urban Planning Office and the Office for Construction and Real Estate, in cooperation with the Local Advisory Council 1, agreed on Friedrich-Stoltze-Platz. Due to the relocation of the Stoltze monument to the Hühnermarkt not only a place became free here, the obelisk is particularly suitable for this location due to the light conditions and the lush tree growth