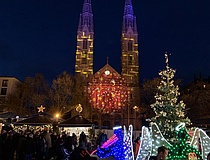 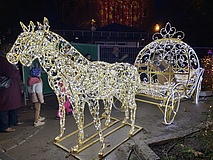 The Hessian state capital has been shining in Christmas splendor for a few days. Of course, Wiesbaden's shooting star market is not quite the same as in previous years. For example, the catering area is separate from the rest of the market and only accessible to those who have been vaccinated or are recovering. There are also fewer stalls overall, although the classics are of course not to be missed. The biggest innovation, however, is that the Christmas happenings this year are not limited to the shooting star market, but can be experienced at three central places.

In addition to the Ferris wheel and the Winterstubb on the Mauritiusplatz celebrates a separate children's shooting star market premiere on the Luisenplatz. This will even be visitable here until 9 January 2022 on Mondays to Saturdays from 10 am to 8 pm and on Sundays from 12 pm to 8 pm. The concept of offering separate areas for children and families has already proven successful in many other cities. A very good example is the children's Christmas market in Nuremberg, which unfortunately has to be cancelled this year. Now Wiesbaden also offers something for families with children: Fairytale-like beautiful light figures, a children's railway as well as a children's skating rink, a bakery and a gastronomic offer with steam noodles, crêpes or cotton candy and roasted almonds are waiting here for the young and old guests.

Access to the site is currently only possible with 2G proof, although for school children the test booklet is sufficient as proof. Especially in the afternoon and evening hours, when the lights are on, the children's shooting star market naturally attracts a lot of people. The disadvantage is that the few offers that can be found here are then in hot demand. One must be prepared not only for very long waiting times, but also - as at the actual shooting star market - for crowded situations, which could cause a queasy feeling for some due to the current situation.

Whether the market can actually stay open until the envisaged end is admittedly not certain at the moment. But as long as it is possible, especially children should be given a real Christmas feeling: "To be able to offer the children and their parents a very special program there is very important, especially this year," said Mayor and Head of the Economic Department Dr. Oliver Franz. In this context, he pointed out the burden on families in particular during the pandemic. "In addition, the children's shooting star market as a supplement to the shooting star market additionally enlivens the city centre. This is extremely important for the retail trade, especially after the lockdowns. The city's economic development department is providing the best possible support here."

The special light show to set the mood of the square was already installed on Luisenplatz in 2020 and delighted numerous visitors during the second lockdown. In combination with the illumination of the Bonifatius Church, spectators are offered an extraordinary atmosphere on the square. "With this overall concept, we want to provide an interesting offer for visitors and make a contribution to the pre-Christmas atmosphere in Wiesbaden; in addition, we also want to concretely support Wiesbaden's retail trade by revitalizing the city center," the mayor emphasized.