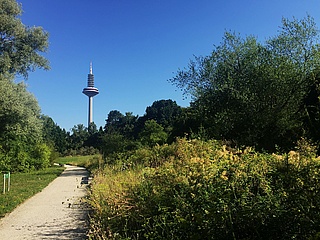 (ffm) The dog days are coming, it's getting as hot in Frankfurt as in the southern states. That calls for a shady spot, plus passionate blues. On the sixth "Wilden Sonntag" (wild sunday) the head of the environmental department Rosemarie Heilig presents a concert at one of the most beautiful places in Frankfurt. To conclude her summer series, she has invited "The King Baumgardt Duo" to the Botanical Garden on Sunday, July 29, at 3 p.m.

With her powerful voice, the American singer from Kentucky is one of the best in the Rhine-Main area. Matthias Baumgardt, her partner on guitar, is known for his energy, passion and virtuosity. "It will be an experience, gripping and rousing," promises Councilwoman Heilig.

With her "Wild Sunday", the environmental department already has a real fan base. The special combination of nature and culture - always at 3 pm on holiday Sundays - has already attracted almost 1000 visitors this summer. Now - as already at the MainÄppelHaus, at the Goetheturm or at Monte Scherbelino - another 200 or 300 could be added. Admission is again free, no registration is required. You just come, spend a nice afternoon in nature and fill up on joie de vivre.

The Botanical Garden of the City of Frankfurt am Main is a particularly diverse place to live. In a quiet corner between the Palmengarten and Grüneburgpark, it preserves more than 4000 species of outdoor plants in an atmospheric natural landscape.

The garden's conservation crops will also be discussed on Sunday. This is about practical heritage conservation: about the heath vetch, the erect whitewash and doubtful oatgrass. The Botanic Garden cultivates these endangered native plants in order to reintroduce them to the wild.

Access to the Botanic Garden at the northern end of Siesmayerstraße is barrier-free. Bicycles must be parked outside, and dogs are not allowed in the garden. There will be some seating, refreshing drinks and small snacks can be purchased at a stand of the health food store Freya.

The program of the "Wild Sunday" and the flyer can be found at <link http: www.frankfurt-greencity.de _blank>