Will the Summer Shipyard 2020 come as a limited edition?
from FFM Aktuell 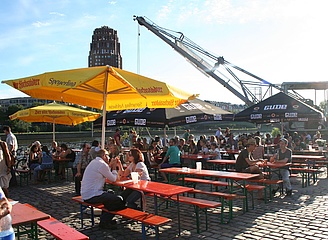 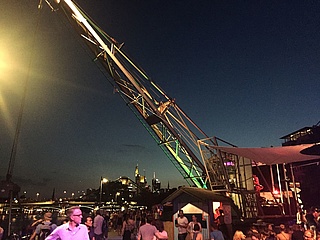 For almost two decades, the banks of the Main at the Weseler Werft have been transformed for a few weeks each summer holiday into a very special place where culture, encounters and art come together. This is a place for everyone who wants to experience theatre, music and more or simply enjoy the end of the day. And all this with free admission. Because it is the desire to bring culture into the public space that motivates the members of protagon e.V. to get the popular Summer Shipyard Festival up and running year after year, despite considerable financial hurdles.

And that should be the case in 2020 as well. But here, too, the corona virus has put a serious crimp in the plans of all those involved. Since all major events are prohibited at least until August 31st, the summer shipyard will not be able to hold the so appreciated kind of events during these summer holidays. But it is not supposed to be completely cancelled either, if the organizers of protagon e.V. - Freunde und Förderer freier Theateraktionen have their way. They are working flat out on ideas and concepts for how culture in public spaces can take place under hygienic conditions. Visitor numbers, live broadcasts and mobile versions play a new and central role in the concept. This could bring a touch of summer shipyard atmosphere to other parts of the city as well.

The considerations are based on the fact that culture and leisure fun are in principle possible again. Although festivals are cancelled, museums and sports halls are open again. Shopping facilities are organized according to Covid and fortunately many people are sensitized to the rules of distance - even if pictures from Sylt or Berlin make you doubt it. But in many areas of our lives it is clear that well-designed infection prevention measures make it possible to live an adapted everyday life, which people need as a basic need, according to the Sommerwerft team.

&sbquo;Not from earthly food do only the creatures thrive', Hölderlin wrote more than 200 years ago. The longing for culture that can be experienced has become more palpable in times of the Covid pandemic. The confrontation through the performing arts, the authentic experience of artistic moments, the unifying language through theatre and performance in public space, they have been missing for many months.

Then even a small dose of Sommerwerft would do us a world of good. "Even in the current situation, we do not want to give up public places of cultural and democratic debate, but rather be able to act flexibly and responsibly in them. We would like to make the performing arts and diverse culture possible even during the Covid 19 pandemic", says Bernhard Bub, artistic director of Sommerwerft.

The roadmap for new formats, a solution for theatre culture in the pandemic period, is being developed together with the Frankfurt-based AES Veranstaltungskonzept GmbH. "We are in close contact with the relevant authorities in order to guarantee a protected sequence of this changed situation in the summer on the premises of the Wesel shipyard", says Benjamin Coppik, managing director of AES Konzept, which in addition to security concepts for major events also develops individual infection protection and hygiene concepts.

Furthermore, the association has developed a further option with "Sommerwerft mobil". As an antagonistic part of a protagonistic basic idea, artists could also move into urban districts with theatre scenes of their plays or with site-specific performances. In this way they would bring the culture of theatre in public space to the people.

For the artists' collective antagon TheaterAKtion, which lives on the cultural grounds of the association and which Sommerwerft is instrumental in implementing, the streets and squares are important places. They can be ambassadors for community where nobody expects theatre, in the districts and housing estates of our city, and can strengthen hope and memory of multicultural participation through the performing arts. This attitude was one of the founding ideas of the association in 1999, and three years later the first summer shipyard took place. "This year we are counting the 19th Summer Shipyard, and we are again taking up a courageous idea for a cultural offer that can be experienced digitally and in analogue form", explains Bernd Abraham, founding director of protagon e.V.

At the moment it is still open in which order of magnitude the costs of the measures could result from the requirements for the realisation of an event. Due to the Covid-19 crisis, protagon e.V. also lacks the finances to adequately support the artistic work. donations are necessary, a corresponding form is deposited HERE on the association's website.

There is little time left in a race against the conditions, the narrow open spaces, the solutions for hygiene measures and an artistic program. The Summer Shipyard team will continue to work on this. We are curious to see what the outcome will be. One thing is certain: it will be surprising and colourful - and it will bring a little much-needed colour into the dreary Frankfurt cultural life of recent months.

A taste of this will be given by the theatre ensemble antagon TheaterAKTion, who live and work together in the East of Frankfurt, on Friday 5 June at 9.30 pm via the livestream for the dress rehearsal of the play "Frame Games", which is about getting out of the frames that surround us. https://www.facebook.com/antagon.theater/