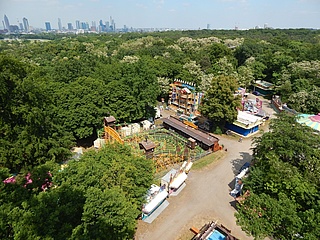 (ffm) Over Whitsun, the Wäldchestag attracts visitors to the Stadtwald from Saturday, May 19, to Tuesday, May 22. At the same time, the public viewing of the DFB Cup match Eintracht Frankfurt against Bayern Munich will take place in the neighbouring stadium on Saturday and the Festival4Family on Whit Monday. To ensure that all visitors can travel to and from the stadium without any problems, buses and trams will be running extra shifts.

S-Bahns and trains to the public viewing at the stadium

For visitors to the football broadcast at the stadium, RMV is offering additional travel options on Saturday. In addition, the extensive additional services for the Wäldchestag are also open to visitors of the Public Viewing. And football fans know: The ticket to the stadium is also an RMV ticket.

Tram to Oberforsthaus and to the stadium

For the Wäldche the correct stop is Oberforsthaus, for the Public Viewing it is Stadion. Both destinations are reached by tram line 21, which is supplemented between the main station and the stadium by the special line 20 and the diverted line 12, so that a dense frequency and enough space is ensured until well after midnight.

From Südbahnhof to Wäldche and to the stadium (stop Stadion/Osttribüne) and back, the lines 61 and 80 offer themselves. On all days, additional articulated buses will provide more space and short waiting times. To the Wäldche, additional trips of line 61 run between Südbahnhof and Oberforsthaus.

The n7 offers additional trips from the festival in the direction of the city center on the nights from Saturday to Sunday and Sunday to Monday: each time at 0.59, 1.19 and 1.29 o'clock the trips start from Oberforsthaus to Konstablerwache.

A nostalgic experience is once again offered by the historic buses, which are commissioned by traffiQ through Autobus Sippel and Omnibus-Historik Königstein to shuttle between Südbahnhof and Oberforsthaus from Pentecost Saturday to Tuesday. Departure from Südbahnhof is from 14 to 23 o'clock every 30 minutes, from Oberforsthaus each 17 minutes later