With humor for more cleanliness: #cleanffm and Palmengarten start cooperation
from FFM Aktuell 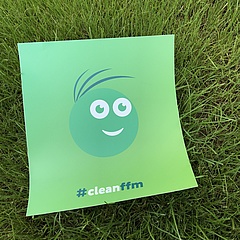 (ffm) "Did you know that the Palmengarten has 160 rubbish bins ready for you, in which over 1200 litres of rubbish end up every day during the high season? That would fill four car trunks." This is one of five Clean Facts with which the Palmengarten, together with the municipal cleanliness campaign #cleanffm, wants to draw garden visitors' attention to the issue of rubbish from now on.

The humorous sayings in the green #cleanffm design can be found on selected rubbish bins in the open air of the Palmengarten as well as at the composting toilet of the Botanical Garden, i.e. everywhere where a particularly large amount of rubbish accumulates. The colorful design is intended to bring the trash cans more into the field of vision of visitors, the facts want to encourage people to rethink or even better to avoid waste.

"How this works, #cleanffm proves since the campaign launch three years ago," says Rosemarie Heilig. As head of the environment department, she is not only responsible for the Palmengarten, but also for the staff unit Sauberes Frankfurt, which in turn is in charge of the cleanliness project. "With 1000 additional rubbish bins, now over 60 snappily formulated facts, with more emptying, additional cleaners, cleanliness ambassadors, park rangers and a growing community, we have already done and also achieved a lot in terms of cleanliness. Now we are going to the Palmengarten to target the visitors here as well."

That the issue of litter does not stop at the historic park is impressively proven by the Clean Fact mentioned at the beginning. "We are very happy about our cooperation with #cleanffm and especially about the fact that we can provide our visitors with interesting facts from our two gardens," says Palmengarten Director Katja Heubach. All five facts are specially tailored to the Palmengarten and Botanic Garden. "Not only do you learn how much rubbish our outdoor cleanliness guard collects on his daily tour, but also, among other things, that our green waste becomes biogas and supplies Frankfurt with electricity."

Claudia Gabriel, head of the Clean Frankfurt staff unit adds, "As the Clean Frankfurt staff unit, we know: You can't draw enough attention to the issue of litter. It is true that we are noticing a rethink among citizens who, for example, get their coffee to go in refillable cups, use cloth bags instead of plastic bags and do without disposable tableware at picnics. Nevertheless, after a beautiful spring or summer day, the rubbish bins in particularly popular places in the city are still full to the brim with packaging and residual waste - currently more than ever. We will not have achieved our goal until Frankfurt residents and visitors to the Palmengarten bring less waste with them."

By the way, you can recognize the Palmengarten Clean Facts not only by the garden-specific themes. The site-works agency also designed a custom emoji for them - circular and green in the look of the campaign, genuinely palm-garden-esque thanks to its three palm frond-like hairs.