With new garbage garages against the packaging flood
from FFM Aktuell 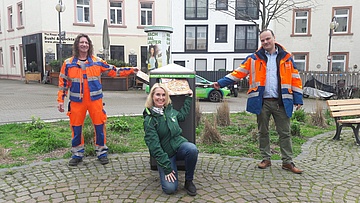 You almost don't believe it, but there are other problems besides the corona virus even in the current situation. One of them is the flood of garbage that cities like Frankfurt are facing. Especially in public areas you can always find to-go cups, pizza boxes or clear packaging of meals and drinks that people have eaten outside. This rubbish not only clogs up the public wastepaper bins, but also tends to be left beside them. For this reason, the City of Frankfurt and FES Frankfurter Entsorgungs- und Service GmbH are adapting the municipal waste disposal infrastructure. Claudia Gabriel, head of the department Sauberes Frankfurt (Clean Frankfurt), and Michael Werner, spokesman of FES, presented the new garbage garage on Tuesday, March 17, at Luisenplatz in the Nordend district.

This is a 120-liter large garbage bin, whose insertion chutes can also accommodate large pizza boxes. Paper baskets in this size are so far only at the Römer, on the Königsteiner Straße in Höchst and on the Matthias-Beltz-Platz. Now, about 30 of the new generation of wastebaskets have been ordered at an individual price of 1500 euros. They are intended for urban squares that are visited by many people and where food and drinks are consumed in to-go packaging.

The Luisenplatz near Berger Straße is such an urban meeting place. Especially on Fridays, the square is used by many as an alternative option for the Friday night meeting Friedberger Markt. Gastronomy and several kiosk shops are within walking distance. The cast-iron frame of the garbage garage accommodates a standard household garbage can without lid. Four large chutes allow easy disposal from all sides. To empty, the FES employee must open a door, pull out the bin, and remove the trash bag.

1890 tons of trash were disposed of through FES' total of 7500 public trash bins in 2019. This equates to a weight per frankfurter of three kilograms. In addition, there are wastepaper baskets at stops and in stations of the VGF, as well as on green spaces, which are managed by the municipal green space office. FES counts 1.5 million litter bins per year. The most common wastepaper bin in Frankfurt, the V3000 model, is made of blue plastic and holds 50 litres.

As part of the #cleanffm cleanliness campaign, 1,000 new wastepaper bins have been hung in Frankfurt over the past two years, 500 of them on streets and public spaces. Many of these will be replaced with larger 70-litre bins in the coming months.