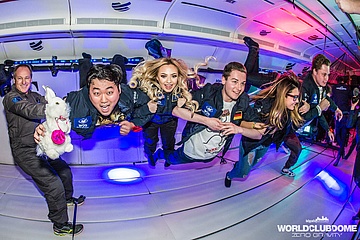 After last year's spectacular debut, arguably the most unusual club experience will take place for the second time on March 25, 2019, when BigCityBeats once again invites you to party in zero gravity. And as you've come to expect from everything WORLD CLUB DOME, this Zero Gravity edition will be even more spectacular than the premiere. So in this second edition, not 50 clubbers will be sent into zero gravity, but 50 celebrities, among them Eintracht Frankfurt star S&eacute;bastien Haller. And he has something very special in mind.

From Frankfurt Airport, it's off to lofty heights for the groundbreaking party in zero gravity. Global superstar and one and only "Space Cowboy" Jamiroquai will be on board in the form of frontman Jay Kay. Also on the illustrious guest list: YouTube and social media sensation Amanda Cerny, star of the series "Orange is the new Black" Dascha Polanco and German Olympic gold medalist and artistic gymnast Fabian Hambüchen. If that wasn't enough, there's also Hawaiian-born travel influencer Jay Alvarrez. And that - those are just a few names from the long VIP list taking part in the trip.

But what would a party be without the right DJs: with Swanky Tunes, Russia's most successful DJ trio is boarding the converted Airbus A310, as well as DJ Soda, Korea's most famous DJ act. China is also a guest on board - with DJ Kaka, the country's most successful DJane. They will all be there to celebrate the "50th anniversary of the moon landing". The Zero-Gravity Club's guest list reads like a who's who of global celebrities. They will all hoist their national flags and prove globaliity. Music is international understanding. All nations united under one roof in zero gravity.

The Airbus A310, specially upgraded for BigCityBeats WORLD CLUB DOME Zero Gravity - is otherwise used by ESA, among others, to train astronauts and carry out scientific experiments. The countdown is on. The starting signal is on Monday, 25 March 2019, when Australian star DJ Timmy Trumpet and BigCityBeats resident DJ Le Shuuk will be spinning in zero gravity shortly afterwards. A total of six minutes of absolute levitation.

But what is it that Bundesliga top scorer and Eintracht Frankfurt star S&eacute;bastien Haller plans to do during the flight? He wants to score a footballer's 1st goal in zero gravity as soon as Sporting Director Fredi Bobic gets the ball into position. 8,500 meters above the Earth's surface! That will be a spectacle! But that is not the only highlight that will be offered in weightlessness: Celebrity chef Tim Mälzer, for example, will create the first salad dressing while suspended, accompanied by live sets from Le Shuuk and Timmy Trumpet. Last but not least, Germany's most successful hip-hop combo will also be there in lofty heights, with a very special surprise: Die Fantastischen Vier. And to round off the circle in zero gravity, two VIPs will also engage in the first game battle with Nintendo controllers high above Planet Earth.

BigCityBeats WORLD CLUB DOME Zero Gravity - Platinum Edition: it is the warm-up for the BigCityBeats WORLD CLUB DOME Space Edition on 7, 8 and 9 June 2019 in Frankfurt. It is the "intro" for the big happening in and around the Commerzbank Arena - the ultimate trip of 50 VIPs and ESA astronauts on board. The event will be broadcast by more than 200 TV stations worldwide and streamed live on Facebook and YouTube. So every single person around the world can be part of it as history is made.

BigCityBeats WORLD CLUB DOME Zero Gravity is a cornerstone of the annual BigCityBeats events. Ordinary clubbing? Not with BigCityBeats. Their mission and bar is higher. Much higher. Unforgettable shows at unforgettable venues - that's the guiding principle of Bernd Breiter, founder and CEO of BigCityBeats. Seven years ago, he invented the extraordinary event concept in Frankfurt - and took it out into the world. The world's biggest club was created over three days in the Main metropolis. More than 160,000 visitors came and more than 750,000 square meters was the entire party area, with 20 gigantic stages, more than 200 spectacular headliners and the largest laser show in Europe - combined with the glitz & glamour of a club with the open-air feeling of a festival.