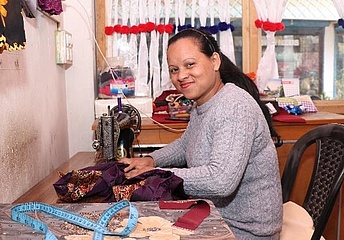 The joy is huge in Dr. Martin Kasper's team. After a three-week voting marathon, the Königstein-based children's charity Childaid Network received the news last week that it had won the Covid-19 Relief Prize.

In the final round of the competition, run by Swiss bank UBS, Childaid Network won against CARE International, a large global charity, and Luminos, a small dynamic charity based in America.

"Winning this award means great recognition for our work and that of our partners during the pandemic," said Dr Martin Kasper. "Above all, it shows the strength of our network. At the same time, it is a great commitment not to slacken our efforts for those most in need, even in these times."

Friends and partners around the world gave Childaid their vote

During the weeks of voting, Childaid Network successfully activated hundreds of partners and funding agencies, corporate and campaign partners, and thousands of friends and supporters around the world, asking them to participate in the vote.

"We were really impressed by the high level of participation in this campaign," said Nicola Schaefer, Childaid Network's volunteer board member since February, expressing her delight. "It's great to see that even with a small click you can make such a big difference and that so many people are convinced of what we are doing. So many people have stood up for us and given Childaid Network their voice. We estimate that with the help of our partners we were able to collect at least 30,000 votes."

Also delighted about the great news is Cornelia Richter, Chair of Childaid Network's Board of Trustees and a globally recognized expert in development cooperation: "What a successful team effort! I am very happy about it, especially about the chance to be able to offer a real future to even more children and young people."

Creating new perspectives for youth with the prize money

With the prize money of 50.000$, Childaid Network will now be able to further vocational skills training for many unemployed youth in the north-eastern Indian states of Assam and Meghalaya. The pandemic has destroyed the already very poor prospects of the young people to get an education and thus to earn their own income. They have no chance in the local job market.

For self-employment, they often lack skills and know-how. That is why Childaid Network is now breaking new ground with start-up programmes and small, flexible training centres in the region. Mobile training teams teach in the villages. The demand in the region is great, also because in this way those can be reached who need help the most. Young people who previously had no access to vocational training because they could not afford to travel to remote training centres are now being given a chance to gain qualifications.

Socio-economic development for an entire region

Vocational training courses are offered that are geared to local needs and for which there is regional demand. Increasingly, this also includes training in high-yield agriculture and microenterprise development. The project planned with the proven local partner Aide & Action can now take off. In a pilot phase, the concept and effectiveness were confirmed.

The German Federal Ministry for Economic Cooperation and Development approved partial funding for the project, initially planned for four years, as early as 2020. But 25% of the project costs must be raised by Childaid Network as its own funds. The prize money from the Covid-19 Relief Prize can now be used to help thousands of young people gain vocational qualifications and economic self-sufficiency.

By 2023, the project is expected to reach more than 10,800 young people. However, the effects on socio-economic development across the region are far greater. In total, the project could benefit more than 50,000 people in one of the world's poorest regions.

You can help ensure that more global education equity projects can be implemented by supporting Childaid Network with a donation, via wire transfer to DE96 5004 0000 0375 5055 00 or online at www.childaid.net/spenden.