World Penguin Day at the Zoo
from FFM Aktuell 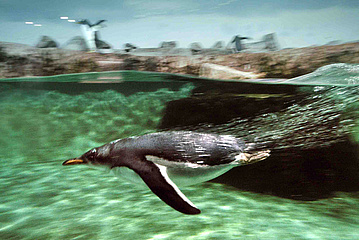 (kus) Every year on 25. April, the Ad&eacute;lie penguins return to their breeding colony on land after many months at sea - this day became a holiday for the researchers at McMurdo Station in Antarctica, which gradually became established worldwide. Many institutions dedicated to the protection of penguins raise awareness of the animals' situation in the wild on this day.

Frankfurt Zoo will participate in World Penguin Day on Tuesday, April 25, 12 to 4 p.m., with an activity stand in the tent at the Great Pond. There you can test your knowledge about Humboldt penguins, take part in a penguin quiz and learn about climate change in a playful way at the climate mobile. There will also be information about the construction of the new Humboldt Penguin Enclosure. At 3.15 pm there will be a commented feeding of the gentoo penguins in the Exotarium.