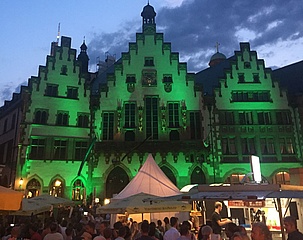 Yes, it was of course a bit of a disappointment when it was announced at the first Green Sauce Day last year that the targeted world record was not achieved. Still, the very hot and humid day was quite a great experience that cries out for a repeat. And it would be a laugh if we miss the world record again in 2019. But that is not the only goal that will be pursued at the second Green Sauce Day on 06 June 2019. Because Frankfurt will also crown the most beautiful garbage can on this day. Sounds crazy? Maybe - but has quite a sense.

Under the motto "Green sauce for all, a clean city for all", the "Frankfurt bin" will be created in advance together with Frankfurt schools, children's centres, art clubs and other non-profit organisations. A dustbin that looks like Frankfurt's popular "Geripptes" or a bin painted with the seven herbs of Frankfurt's cult dish - there are no limits to the imagination for the "Frankfurt bin". Partners of the idea generator and competition organizer Art-Q are the Frankfurt cleanliness professionals of #cleanffm and the FES.

"The Green Sauce Day is a day for everyone - together we have found a topic that concerns everyone and from which everyone benefits: a clean city," says Frankfurt's head of environment Rosemarie Heilig. The FES is making 150 rubbish bins available to schools, children's centres and other organisations with immediate effect. They can paint or make anything they like and that suits Frankfurt. The bins will be presented and awarded prizes on 6 June, Green Sauce Day. The works will be presented on a catwalk on the banks of the Main at Frankfurt's first bin fashion show. The bins will not be forgotten afterwards, but will continue to be used - among other things at city festivals.

"Everyone knows that Frankfurt is(s)t green sauce. Now the children and young people are showing us what they associate with their city," says the organizer of the Green Sauce Festival, Maja Wolff, and furthermore, "with their Frankfurt buoy, the children and young people are creating something that will continue to be visible in the city even after the Green Sauce food world record (attempt)."