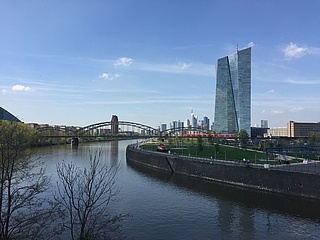 There was a collective sigh of relief in Ostend on Sunday afternoon: the 500 kg World War II aerial bomb, which had been found a few days ago during exploratory work on a construction site near the ECB, was successfully defused by the Explosive Ordnance Disposal Service of the Darmstadt Regional Council. Already around 3:30 p.m., the defusing was completed, so that all cordon measures could be lifted shortly thereafter.

Affected were about 16,500 people, who had to leave the evacuation area early Sunday morning until 8 o'clock. A care center was set up at the Zoogesellschaftshaus for people affected by the evacuation, and this was attended by around 300 people at its peak. Frankfurt museums also invited those affected with free admission, which was also well received.

Well busy were also the rescue services and civil protection units, which had to transport about 300 people in need of assistance from the evacuation area. A total of around 700 emergency personnel from the volunteer fire brigade, the professional fire brigade, the citizens' helpline and aid organisations from Frankfurt and the surrounding area were deployed. Likewise, numerous forces of the state police as well as the public order office of the city of Frankfurt were involved in the evacuation and defusing measures.

Lord Mayor Peter Feldmann expressed his thanks to all those who helped with full commitment to ensure that the evacuation and defusing could proceed smoothly: "My special thanks go to the explosive ordnance disposal service, police, fire brigade, emergency services and the employees of the city administration. This is all the more true as the workload in recent weeks has already been very high due to various major events. My thanks also go to all the city's facilities that have allowed evacuees free entry to the open museums and the Palm Garden." He added: "I would also like to thank the citizens in the affected districts for the smooth course of events. I know that it is not easy for many people to give up their own homes unplanned."

Security Department Head Markus Frank praised the professional cooperation of the explosive ordnance disposal service, fire department, state police and municipal authorities: "In the meantime, there is a high level of experience in the professional removal of terrible contaminated sites from the Second World War, not least due to the largest evacuation of the post-war period in the defusing of the 1.4-ton world war bomb in September 2017. So once again today, our Frankfurt professional and volunteer fire brigades and the Frankfurt aid organisations and rescue services, together with the state and city police and the Hessian Explosive Ordnance Disposal Service, have demonstrated that the protection of our population and their belongings is in the best hands with you. The ability and willingness of our experts and numerous volunteers to solve complex tasks quickly and competently in the interest of citizens, businesses and institutions is exemplary in our urban society and deserves the highest respect, recognition and thanks!"

Frankfurt-Tipp.de would also like to join in this thanks!