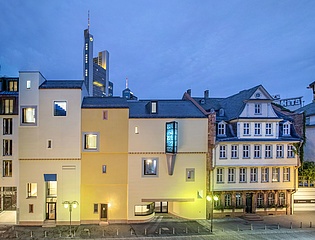 On September 14, the time has finally come: then the German Romanticism Museum will open right next to the Goethehaus. It is the first museum in the world to be dedicated to the era of German Romanticism as a whole. The history of the museum's development stretches over several years, which the team of the Freies Deutsches Hochstift has spent working on the realization of this project. But the effort and the wait have been worth it. There is no question about it: Frankfurt's already diverse, high-quality museum landscape has now been enriched by a real highlight. In a few days, all interested lovers of Romanticism will be able to see this for themselves.

What awaits you in the museum? In addition to the Goethe Gallery with its numerous paintings, there are 35 stations on two floors to discover unique originals of Romanticism with innovative exhibition forms that make this time as a key era tangible. In doing so, the museum skilfully manages the balancing act between the past and the modern age by offering not only fascinating exhibits but also numerous multimedia, interactive media exhibits that invite visitors to encounter the originals on virtual mediation levels. Of course, the neighboring Goethe House also occupies a special position.

Prof. Dr. Anne Bohnenkamp-Renken, Director of the Freies Deutsches Hochstift emphasizes, "Despite all the imponderables that such a large undertaking entails, it was a great stroke of luck to be able to work on the realization of the German Romanticism Museum. It is the work of numerous people who have worked together on this project in very different ways. My thanks go to all those who have accompanied us on the way from the initial idea to the opening. We are delighted to finally be able to open the museum to the public after ten years of intensive work."

The three new façades of the German Romantic Museum form a single unit with the façade of the historic Goethe House. The new house was built by MÄCKLER ARCHITEKTEN on the architectural footprint of Michael A. Landes. The exhibition space of around 1,200 square metres extends over three floors. A further 400 square meters are available for temporary exhibitions. The building also has around 100 square metres for rooms for educational work as well as a spacious entrance area with a ticket office, function rooms and a museum shop. The foyer is also the entrance area for the neighbouring Goethe House.

The very special exhibition concept was developed by a team of curators from the Freie Deutsches Hochstift (Prof. Dr. Anne Bohnenkamp-Renken, Dr. Mareike Hennig, Dr. Konrad Heumann, Prof. Dr. Wolfgang Bunzel, Dr. Joachim Seng) and the musicologist Dr. Ulrike Kienzle in close cooperation with Petra Eichler and Susanne Kessler (Sounds of Silence), who are responsible for the artistic direction of the permanent Romantic exhibition. The designers from Sounds of Silence have created an intense atmospheric space in the Romantic exhibition. Their staging allows visitors to dive directly into the history of the objects on display and ask about their significance for the present. Each station has been artistically designed individually with attention to detail, and various artists have contributed to its realization. The heart of the museographic staging is the exhibit furniture specially developed for the German Romantic Museum, which allows the precious originals to be displayed.

Another important aspect in the design of the museum was the lighting concept. This was created and implemented by the lighting designers atelier deLuxe. The central task was to artfully illuminate the museum's sensitive manuscripts with the lowest possible brightness (35 to 50 lux) while still allowing them to appear to visitors as luminous and easily legible exhibits. This was achieved with a special development in which miniature lights were placed in the display cases, invisible to the viewer.

The museum's soundtrack was created in cooperation with the radio station hr2-kultur. Actors and actresses such as Ulrich Noethen, Mechthild Großmann, Michael Quast, Constanze Becker and Christoph Pütthoff participated in it. Their voices can be heard as "room sound", "sound shower" or via headphones in the museum - with letters, poems, scientific research, fairy tales and personal testimonies from German Romanticism. In addition to the voice recordings and sound design, the Hessischer Rundfunk also produced the recordings for the almost four-hour new media guide through the entire exhibition complex.

There's no question about it: there's plenty to discover in the new museum and to experience the Romantic era in a whole new way. From 14.09. you can make yourself a picture of it.

Children up to 6 years free

For members of the Freies Deutsches Hochstift admission to the exhibition areas is free of charge.

More info is available at: https://deutsches-romantik-museum.de