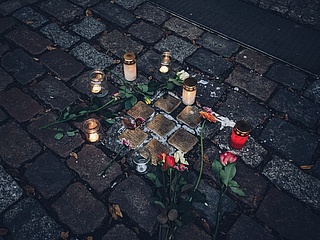 It is a horror we must never forget: The murder of millions of Jews during the Nazi regime. In Frankfurt, where the Jewish community had more than 30,000 members by 1933, 11,908 Jews were deported and murdered in Nazi concentration camps. Something like that must simply never happen again. That is why remembering is so important. We must remember the cruelty, but also the names behind the countless fates.

That is why Frankfurt-based artist Margarete Rabow has called for the "Writing Against Forgetting" campaign. The aim is to write the 11,9008 names of the Frankfurt death victims of the Shoah with chalk on the Mainkai until August 27. In this way, viewers can see at once the enormity of the Nazi regime's deeds - until the rain washes away the chalk or the sun causes the writing to fade. It is an ephemeral art project, at the end of which the film "11.908" remains, documenting the art action.

Many citizens have contacted Rabow to take part in "Writing Against Forgetting". And the final event scheduled for Sunday, Aug. 30 at 4 p.m. at the Haus am Dom is also completely booked. It is an encouraging sign that the interest in an action against forgetting is so great. But also all those who are just taking a walk along the banks of the Main or watching the writers create the artwork are welcome to exchange ideas with the participants. For only a constant dialogue and an ongoing sharing of memories will help to ensure that this terrible chapter in history cannot be repeated.

For more information on the campaign, please visit: https://schreiben-gegen-das-vergessen.eu/