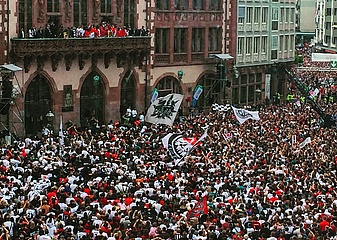 What a soccer thriller it was: Eintracht was the stronger team in the UEFA Europa League final against Rangers from Glasgow from the start, but then had to fear for victory for a short time when Rangers took a 1-0 lead. After the really great equalizer, there were strong moments and great scoring chances again and again, but it remained 1-1 until the final whistle. There was no goal in extra time either, which is why it then came to a penalty shootout well after 11 pm. The rest is already history: After 42 years, Eintracht brought the title to Frankfurt in an international competition. That was a fantastic achievement.

Frankfurt's mayor Peter Feldmann also sees it that way: "With our Eintracht, the whole city rejoices." The city leader had watched the final against Glasgow Rangers live at the Estadio Ramón Sánchez Pizjuán in Seville. "The atmosphere was unique - especially because of the Frankfurt fans who had passionately supported their team," Feldmann added.

The Lord Mayor described Eintracht's victory in the final as "one of the greatest successes in Frankfurt's sports history" and an event that would turn generations of Frankfurt residents into Eintracht fans. "This final against Glasgow was a feast for soccer romantics and an evening where heroes were made. Like the team that won the DFB Cup against Bayern Munich in 2018, the players proved this time that passion and team spirit can make more of a difference in soccer than astronomical player budgets and big names. We are proud of your performance," said Feldmann.

The reception that the city and fans want to give Eintracht today will be correspondingly big when the coach and players arrive at Frankfurt Airport at around 5:30 p.m. and travel from there in a motorcade towards the Römer. There, the team is to sign the city's Golden Book at a reception at around 7:30 pm. Afterwards, the team will present the trophy to the fans on the Römer balcony. Around the Römerberg, 80,000 - 100,000 fans are expected. Screens will be set up at Römer and Mainkai so that as many people as possible can experience the moment when the team presents itself to the fans with the trophy. The cheers will be heard far beyond the city limits.

"So that nothing goes wrong: I ask everyone to follow the instructions of the security and law enforcement officers," said Feldmann. An event like this, he said, is teamwork like winning a soccer match. "It only works if everyone pulls together," the mayor emphasized. The city is once again urging all visitors - including those traveling from further afield - to use public transport in any case. There will be virtually no parking available in downtown Frankfurt. Parking garages, for example, will be closed. Railroads and buses have announced that they will expand their services.

We had already compiled more info for you yesterday HERE.