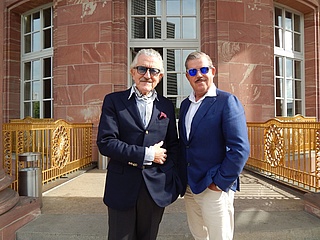 With songs like "Oh Yeah", "The Race", "Vicious Games" or "Rubberbandman" the two Swiss Boris Blank and Dieter Meier alias YELLO belonged to the very big hit suppliers of the 80s. Their sounds were groundbreaking for electronic music and still serve as soundtrack for countless TV series and movies - currently "Oh Yeah" can be heard briefly in the new Marvel movie "Spider-Man: Homecoming". On the occasion of the band's 35th anniversary in 2014, they received the well-deserved ECHO for lifetime achievement. Now you might think that this would have been a good time for Blank and Meier to retire YELLO. Far from it. 2016 saw a new album, "Toy", and now - for the first time in the band's 38-year history - YELLO are going on a big live tour. Instead of sitting alone at the mixing desk and computer, the songs will now be recorded live by twelve musicians. Unmistakably YELLO and yet somehow completely new.

Before they will perform in the Festhalle on November 29th, Boris Blank and Dieter Meier already stopped by in Frankfurt last week. In an interview they told us what the audience can expect at a YELLO concert. After all, YELLO was never just about the music. The visual realisation in the form of video clips has always been part of the overall work of art. A perfect interplay of Boris Blank's sound tinkering and Dieter Meier's video art. And this will be no different on the first live tour. The show will be "a self-ironic-operatic entity", says Dieter Meier, who will enter into dialogue with his 30 years younger self via video screen, sing duets with him and encourage him to dance.

While Dieter Meier already has live experience through his solo tour, Boris Blank is entering completely new territory here. "For me it's a trial by fire," he says. But after the first four concerts in Berlin, the excitement is no longer quite so great, simply because of the enthusiasm of the fans. "When you see how happy people are, how much they enjoy the music, it's very relaxing," says Blank. And Dieter Meier is also happy to feel the euphoria among the fans to finally experience YELLO live. "It was a joy to ride the crowd's encouragement like a surfer," he describes his experience at the first live concerts. It will certainly be no different in Frankfurt.

For the audience will not only get a musical journey through almost 40 years of band history, with all the hits you can expect as a fan at a YELLO concert. There are also new and surprising things to hear and see. For example, Boris Blank will create new sound worlds live with the YELLOFIER app he developed. The app, which is even used in a Los Angeles kindergarten to introduce children to music through play, is a testament to Blank's love of music. "I need to produce moods, images and timbres," he tells us. As a result, he says, new ideas are always emerging, even in everyday life and in unusual places. For example, he secretly recorded a sound in the cannon of Vasco da Gama in the Museum of Nautical Science in Lisbon. How that works and what you can do with it, he will also present on the tour.

When talking about their music and the concerts in Berlin you can tell that even after almost four decades they are still full of creativity, drive and love for their fans. Boris Blank and Dieter Meier have fun doing what they do and are absolutely aware of what they owe their audience. And that's exactly why we can assume that the first YELLO tour will be nothing less than a great spectacle with high show and entertainment value! We are looking forward to it!

Find more info about the concert in Frankfurt HERE

Tickets for the concert can be ordered HERE