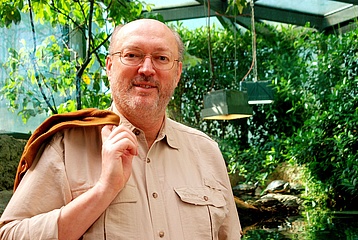 (pia) During the eight-year tenure of director Manfred Niekisch, Frankfurt Zoo has moulted into a modern nature and species conservation centre. The magistrate of the city of Frankfurt has now extended the term of office for the go-getting zoo director for another year.

"I am very pleased that zoo director Manfred Niekisch will continue to drive the zoo and its development forward for another year," says Ina Hartwig, head of the department for culture and science. "Many projects were initiated and realized by Manfred Niekisch. The most current project is the construction of a new penguin enclosure - the prepared construction work has just begun. I presented the plans for the new penguin facility with Manfred Niekisch two weeks after taking office, and I look forward to its opening in 2018." Due to his age, Niekisch's term would end on December 31 this year, but he will now steer the zoo's fortunes for another year.

"Experiencing animals - preserving nature," the zoo's strong motto, is something Niekisch lives by with his skin and hair. He tirelessly promotes nature and species conservation worldwide and drives the expansion of the zoo: opening of the Borgori Forest ape house in 2008, opening of the gibbon house in 2009, opening of the Ukumari Land facility for howler monkeys and spectacled bears with a new entrance area in 2013, opening of the quarantine station in 2014, and the go-ahead for the construction of the new penguin facility in 2016. "I still have many ideas for the zoo," says Niekisch, "it burns under my nails to continue working and to implement the visions that I have worked out with my team."

Not least due to the trend-setting new buildings of recent years, the zoo has transformed itself into a modern nature and species conservation centre. The fact that this development is appreciated by the general public is evidenced by the visitor numbers of circa 900,000 per year. "The new construction of the penguin enclosure is another milestone on the way to a sustainable zoo with modern zoo animal husbandry and a sophisticated visitor service," Hartwig and Niekisch agree.