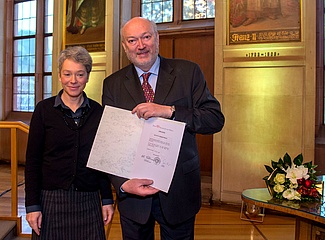 (kus) Since the beginning of 2008, Prof. Dr. Manfred Niekisch has steered the fortunes of Frankfurt Zoo, one of the most popular educational and leisure facilities in the city and the entire Rhine-Main region. Over the past ten years, the zoo has undergone a modernisation drive and continued to develop into a nature and species conservation centre. Niekisch's term ends on December 31.

"Prof. Dr. Manfred Niekisch has lived the zoo's motto &sbquo;Experience animals - preserve nature'. During his years in office, he was instrumental in driving forward the expansion of the zoo and promoted nature and species conservation worldwide. He was also able to represent this concern in public with an impressive presence, thus giving Frankfurt Zoo the positive image that it undoubtedly deserves," said Ina Hartwig, Head of the Department of Culture and Science, in praise of the Zoo Director's work. "The City of Frankfurt sincerely thanks Manfred Niekisch for his commitment. The fact that this zoo is a place of education and learning, an attractive destination for excursions, one of the most popular and well-known leisure facilities in Frankfurt and the region with over 800,000 visitors annually, is due in no small part to the successful work of Prof. Niekisch over the past ten years," says the city councillor.

During Niekisch's tenure, the Borgori Forest ape house was opened in 2008, followed by the Gibbon House in 2009, the Ukumari Land South America facility with a new entrance area in 2013, and the new quarantine station in 2014, as well as the go-ahead for the construction of the new penguin facility in 2016. "Passion and commitment of the zoo staff is what makes a good zoo like the one in Frankfurt: Of course, animal-friendly modern facilities that are attractive to visitors are key. But Niekisch has ensured that both areas have been able to develop further," says Hartwig.

Niekisch himself had set himself the goal of educating people about the importance of zoos and their tasks, making Frankfurt Zoo better known and strengthening its species conservation profile when he took office. He was also keen to intensify research, strengthen the zoo as an educational institution and optimise animal husbandry through modernisation and new facilities. "Much of this," says Niekisch, "I was able to implement thanks to my staff and the support from the Department of Culture, the Magistrate and the municipal committees. I would like to express my sincere thanks for this. I will always remain connected to Frankfurt Zoo. Above all, I wish that our fine inner-city zoo will continue to be accorded the importance it has in the future - namely, to be an oasis for people and animals in the midst of a rapidly developing metropolis and a center for the all-important conservation of nature and species."

The magistrate will decide on Niekisch's successor early next year.

Niekisch, born in Nuremberg in 1951, holds a doctorate in biology with a focus on zoology and learned his discipline from the ground up. During his studies, he worked for a total of two years as an animal keeper at the Cologne Aquarium at the Zoo. Since 2010, he has held the professorship for International Conservation at the Goethe University Frankfurt. In 2016, he was appointed to the German Advisory Council on the Environment (SRU) for the third time. In August 2013, he was also appointed to the Scientific Advisory Council for Forest Policy of the Federal Ministry of Food and Agriculture. In July 2014, he was appointed to the State Nature Conservation Advisory Council of Hesse. In October 2015, he was elected Chair of the Committee on Conservation and Sustainability of the World Association of Zoos and Aquariums (WAZA)