Zoo is happy about new okapi offspring
from FFM Aktuell 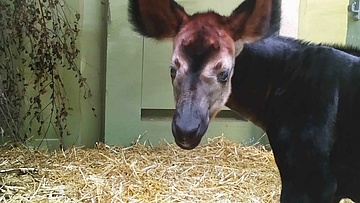 How cute! The <link https: www.frankfurt-tipp.de freizeit s zoo-frankfurt-ein-erlebnis-fuer-die-ganze-familie.html _blank>Frankfurt Zoo is once again happy to welcome cute little cubs. Already for the second time this year there is this joyful news to report from the Okapis. Already on 9 November a small bull was born. His half-sister Neyla, who was born in April, has already conquered the hearts of many zoo visitors with her cheerful buck jumps across the grounds.

14-year-old Etana is the mother of the little forest giraffe. "For the calm Etana it is already the fourth young animal. Accordingly, she is relaxed and experienced with the little one," reports zoo director Professor Manfred Niekisch. The birth took place in the okapi enclosure in the giraffe house. In the first few days after the birth, the house remained closed so that nothing would disturb the important mother-child bond. Now the house is partially accessible again. Only the okapi area is largely closed off until further notice. Largely - because the little bull is developing splendidly, so the zoo has decided to also make the okapi area accessible for one or two hours in the afternoon, if possible. "Okapi cubs are relievers. That means they lie in a nest while the mother moves away. She does this to avoid alerting potential enemies to the cub. In the early days, okapi mothers only approach their offspring to suckle. During this phase, both need a lot of rest. In a few weeks, we will be able to fully open the giraffe house again," Niekisch explains.

There are currently 69 okapis living in European zoos under the European Conservation Breeding Programme EEP. "Worldwide, there are only 164 animals in zoos. This breeding success is invaluable for the conservation of the species in the world's zoos. With the very unstable conditions in the okapi's area of origin, the zoo population represents a last reserve for the survival of the species in the first place," says head of culture Ina Hartwig.

Father of the young animal, which the keepers have named Dayo - meaning "great joy" - is Ahmadi, also 14 years old. With the two females Etana and Antonia and the two cubs, there are now a total of five okapis living at Frankfurt Zoo. They cannot be seen all together, however, because okapis live as solitary animals and only come together during mating season.

Okapis (Okapia johnstoni) are endemic to the Democratic Republic of Congo. With their fur markings and large ears, they are perfectly adapted to a life in the rainforest. Despite intensive conservation efforts, okapis are considered critically endangered