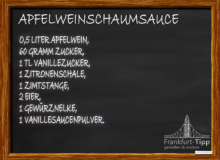 This delicious sauce, which of course tastes particularly good with real Frankfurter Äppler, is especially popular with Frankfurter pudding. For the sauce you need the following ingredients:

Take the apple cider first, saving a little (a few tablespoons) for later, and mix it with the sugar, vanilla sugar, a piece of lemon zest, clove and cinnamon stick and bring the whole thing to the boil. Now let the whole thing steep for a bit so that the spices can spread all their flavor. Now you should run the whole thing through a sieve into another pot so that you get spiced apple cider.

Now mix the remaining apple cider with the vanilla sauce powder and stir in 2 egg yolks. Now bring the spiced cider back to a boil and stir in the mixed sauce powder. Bring to the boil briefly and whisk the sauce until creamy. Now whip the egg whites, which you hopefully saved, until stiff and fold them into the sauce, which is no longer boiling. Ready is the delicious sauce!