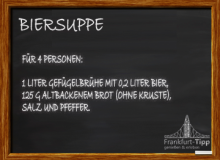 For 4 people: 1 litre of texture stock with 0.2 litres of beer, 125g of stale bread (without crust), salt and pepper

Bring everything to the boil, covered, and simmer gently for half an hour. Puree with a blender. Stir in a cup of cream and season with freshly grated nutmeg. Serve very hot.

A good 300 of Germany's 1270 breweries are concentrated around Bamberg, in Upper Franconia. The most venerable of these is the Hartmann brewery in Würgau, where the virtuoso handling of hops and malt has been practiced since 1550.

Dr. Peter Dietel has made such highlights of his homeland his own, not entirely altruistically, understandably. The chemist, born near Bayreuth and called "Bierdoktor" in relevant circles, has been living in Frankfurt since 1987 and is engaged in the development of chemistry databases. For the beer gourmet trained to Upper Franconian standards, Frankfurt's offerings were not enough, despite (or because of) the large breweries. So in 1992 Dietel began creating "oberfränkische Charakterbiere", as he calls them, down the Main. However, if he lived, say, in Hamburg, he would, for good reason, probably do without. Because such gently filtered beer is a sensitive brew, comparable to the wine that tasted so good at the farmer winemaker in Italy. At home it no longer did, because it had given up the ghost on the way. So Dietel's program includes only a few, carefully selected, full-bodied and palatable beers that are also sufficiently stable for the short journey down the Main.

Nothing but hops and malt, water and yeast go into their beer, German breweries proudly and constantly proclaim. Rightly so, as Dietel points out: the big breweries, which market their output nationwide, brew little differently from the small, traditional ones, whose beer is tippled from the spot. So pure, so good. However, in order to make their beer storable for a longer period of time and to protect it against the stress of long transport routes, the big ones are forced to either "sharp"filter or pasteurize. Flavors fall by the wayside in any case.

Dietel's Franconian partners have nothing in mind with nationwide distribution structures, because the beers can't stand longer storage. Rather, bringing them fresh from the bottling line directly to the customer is the ambition. The beer doctor supplies around a dozen Frankfurt pubs and also tries to exert influence to ensure that the noble barley juices are not mistreated in the pubs. Above all, too much cold (as well as heat) is not good for them. It is better to drink them at 8 to 10 degrees than at the usual 6 to 7 degrees. The drinking vessel is also important. Pilsner tastes best from a small tulip glass; the aroma of a dark full-bodied beer, however, comes out best in a thick-walled mug.

Felsentrunk, Erbschenk 1550, Kellertrunk, Festbier, Rauchbier, Felsenweiße - whoever orders and tastes all this beautiful variety from the Beer Doctor as a tasting box will increase in wisdom. And sleep well afterwards.

The enjoyment of a light, smooth beer soup, on the other hand, does not induce fatigue. Since the alcohol evaporates through cooking, it can safely be served to children.