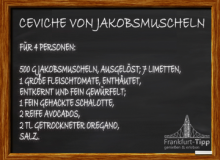 Squeeze 6 limes. Cut the mussels into thick slices or merely halve them, put them in a glass bowl, cover with the lime juice and refrigerate for an hour. Then drain them in a sieve and pat them dry. In another bowl, mix the tomato pieces with the finely chopped shallot and the finely diced flesh of the avocados, season with salt and the oregano. Stir in the juice of the last lime. Add the mussels and serve. Serve with white bread for a refreshing appetizer of the not-so-common kind.

Drinking booze is frequently mentioned in Raymond Chandler's mystery novels. In the classic novel "The Long Goodbye" a long drink, the gimlet, is lovingly discussed. It consists of nothing more than gin and lime juice of the brand "Roses Lime Juice". You can buy it in every better supermarket. It comes from England, where the juice of the green citrus fruit is so popular that the British were nicknamed "Lime-Juicer". After all, limes were commonplace on English ships as a remedy for scurvy. Although they contain less vitamin C than lemons. Very juicy, highly aromatic, mostly seedless and rich in potassium, calcium and phosphorus, they are healthy enough and perfectly suited to spice up the sailors' grog.

Limes, incidentally the most cold-sensitive citrus fruits, have their home in Southeast Asia. They came with the Arabs to Spain, and from there to the New World. Today they are grown in India, Kenya, Mexico, the Dominican Republic, Brazil and Florida. So they are available all year round.

At the Wongs' stall in Kleinmarkthalle, the one best stocked with fruits and vegetables from Southeast Asia (Simon Wong is Malaysian), Gisela Wong observes a continuing boom in the little green flavour bombs. The usual ones are the favourites of German customers, for Caipirinha in the first place, the likeable, refreshing long drink made of sugarcane schnapps, sugar syrup, lime juice and crushed ice.

Colombians are more interested in papayas drizzled with lime juice. Thais and friends of Southeast Asian cuisine are also familiar with the kaffir lime. It is not so much the unproductive juice that is in demand, but rather the thick, wrinkled, but very aromatic peel. This, but also the leaves, season many dishes of Thai cuisine. Papaya pukpuk, for example, unripe papayas with shrimp and chilies, or Tom Yun soup based on fish stock.

Fish and crustaceans can be prepared well as céviche. This method, it is said, originated in Chile or in Peru, if not in Mexico; in any case, it is of a typically Pacific type, and is reminiscent of the Japanese process of cooking raw fish in soy sauce until cold, as it were. In Latin America lime juice is used for this purpose, and impressive results are obtained in the simplest manner. There is no other method that makes fish and crustaceans taste as much like the sea as céviche. Also and especially scallops, if they are really fresh, turn out wonderfully this way. It shouldn't be surprising if Céviche would soon be on the menus of trendy eateries.