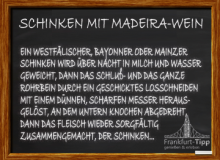 (according to Johann Rottenhöfer: "Illustrated cookbook)

New complete theoretical-practical instruction in the fine art of cooking with special consideration of the stately and bourgeois cuisine". (Munich, 1884)

"A Westphalian, Bayonnian or Mainz ham is soaked overnight in milk and water, then the end and the whole reed bone is removed with a thin, sharp knife by skilful lopping, the lower bone is turned off, then the meat is carefully put together again, the ham is tied like a net with a string, placed in a suitable, well-closing dish, covered with some pieces of beef and a veal jarret (calf), with some onions, yellow turnips, a celery, several parsley roots, bay leaves, cloves and whole peppercorns seasoned, sprinkled with two bouteilles of good Madeira-Sec and just as much good consommé, covered, the lid with brewed flour dough well wrapped, the dishes placed on a burning wind oven, and when the ham begins to boil, the dishes placed in a cooled oven and four to five hours, depending on its size, steamed quite slowly, quite slowly, and depending on its size, steamed. After this time, the ham will be soft and in its fullest juice; it will now be carefully removed with a large, flat skimmer, tied open, the skin removed, cut cleanly on all sides, beautifully glazed, a paper cuff attached to the bottom of the bone, arranged and kept warm. The ham essence is passed through, very purely degreased, boiled purely with a spoonful of sauce espagnole for half an hour and added in a sauce extra."

>With Waldemar Thomas in search of the Jambon de Mayence

Alexandre Dumas the Elder is known as the author of the "Three Musketeers" or "The Count of Monte Christo". But as a cookbook author? Not so many people in this country know him. In his "Grand Dictionnaire de Cuisine" he not only sings a hymn of praise for the deliciousness of pork but also for its benefits for the national economy: "Ham and shoulders of pork have brought two cities their wealth: Bayonne and Mainz". Which brings us to the subject: The legendary Mainz ham, the Jambon de Mayence.

That the old town on the Rhine is mentioned in this context at all, surprises us a lot today. The great time of Mainz ham has passed too long, its once fabulous reputation blown away too thoroughly. It is indeed not easy to track down the lost class of Mainz ham.

Klaus Heck, Lord Master of the Mainzer Metzger-Innung, of course knows immediately if you talk to him about "Mainzer Schinken". Already with Rabelais (1494-1553), the author of "Gargantua et Pantagruel" the "Jambon de Mayence" is mentioned: "Grandgousier was at the time a funny fellow who loved to drink to the bottom and eat salted food like everyone else. For this purpose, he always kept a good supply of Mainz and Bayonne ham, smoked ox tongues, sausages of various kinds, as the season was".

He himself, says master butcher Heck, had already made various efforts to find a recipe for this much praised delicacy, but so far without success.

The Magister Elsholtz, who is consulted here from time to time, knew the Mainz ham: "Today the Westphalians have the advantage as well as the Mainzischen, les Jambons de Mayence". ("Diaeteticon" by 1682). The "Universal-Lexicon der Kochkunst" of 1890 also states: "...the best German hams are the Westphalian and Mainz hams".

Johann Rottenhöfer, "royal chamberlain and first mouth cook before His Majesty King Maximilian II of the Second World War". We obtain the best hams from Westphalia, Pomerania, Bayonne and Mainz, because they are characterised by the tenderness of their meat and by an excellent taste" (1884). However, also Rottenhöfer doesn't get beyond generalities. The authors remain silent about how Mainz ham was made, what distinguished it, why it was praised everywhere. So one must assume that the secret of the origin of the Jambon de Mayence has fallen into oblivion, especially as the Mainz butchers seem to know nothing more about it.

This reference in the Bible of Culinary Art, dear Mainz butchers, should be able to do something about it. Even if Obermeister Heck is sceptical in view of difficult times.