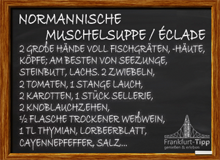 Clean and chop the vegetables; wash the fish parts. Heat the oil in a large pan and sauté the vegetables and fish in it. Add the chopped garlic, thyme, bay leaf and salt. Fill half with white wine, half with water so that the contents are just covered. Bring covered to the boil and simmer for about ½ hour, that's enough. Pour everything through a sieve (preferably a pointed sieve, because it fits best) into another pot, squeeze out everything well with the back of a ladle.

In the meantime, put the brushed, wet mussels (throw away open) into a pot, put the lid on top and apply the greatest heat so that the mussels open quickly. After 3 minutes pour the mussels into a strainer, collecting the mussel water. Wait a moment - the sand settles - and carefully pour the liquid into the fish stock; remove the mussels (now the ones that have not opened) from the shells and keep them warm. Heat the fish stock, stir in the cream, season with salt and cayenne pepper, add the mussels, sprinkle with the chopped parsley and serve with toasted slices of white bread.

Cleaned, washed mussels are spread out on a plank of olive tree wood and densely covered with dry pine needles. The needles are set on fire, and when they turn to ash, the mussels are cooked and very aromatic. You eat them hot with farmer's bread and butter and drink wine with them.

Éclade, a dish from the French Atlantic coast (Charente-Maritime), is well suited for a late summer picnic near a fir or pine forest. It can also be prepared in a simpler way:

Shells must be thoroughly washed, any open ones thrown away, the rest drained. First arrange five shells in the middle of the plate with the tip facing forward in a rosette-like arrangement. Now carefully insert the next row of mussels into the gaps. Ensure that the mussels are firmly seated together. Continue this way until the plate looks like a rose with many leaves. Now cover the mussels like a pyramid with the completely dry fir needles and light the needles. The fir needles burn crackling and fragrant in about 8 minutes to ashes. The shells are ready. They remain closed and still contain the mussel juice. In addition strong country bread, salted butter and a strong Gros Plant of the Loire.

>With Waldemar Thomas with mussel-Laudigeois in Frankfurt

Miesmuscheln, the "oysters of the little man", are of course not bad mussels. Their name derives rather from "moss", as the thin threads remind of, by means of which the mussels cling to all sorts of substrates. Particularly fond of stakes, which is why they are also called mussels. The use of the most important edible mussel species was recognized early on, and a quite precisely handed down story tells how the blue-violet shellfish were discovered to be constantly useful for breeding.

It was in 1290 when the Irish traveller Patrick Walton was shipwrecked on the French Atlantic coast near La Rochelle. There he spent his life as a bird catcher and one day observed that the poles he had set up to fasten the nets in the shallow water were covered with shells that could be eaten well. He connected the stakes by braided twigs to invite more shells to settle. From these beginnings the today's French mussel-breeding developed at the Norman and Breton coasts. It was this wickerwork that gave the smallest and finest mussels their name: bouchots.

mussels, as they used to be called, are only eaten in the months with an "r" in the name, i.e. in the cooler season, which certainly had something to do with the inadequate cooling possibilities. So they are in season now, and certainly mussels are now available at Frankfurt's best fishmonger, René Laudigeois at the Kleinmarkthalle gallery.

However, it can happen that you can only buy bouchots, and not the usual, larger and usually cheaper mussels from the North Sea, Monsieur Laudigeois explains. Because their stocks would be overfished in some years, and since the mussels need sixteen months to become large and edible, they are scarce. The few that would still be traded are more expensive than bouchots, in normal times this is the other way around. These are bad times for the popular "mussels in the Rhineland way", which, with bread, butter and top-fermented beer, are the culinary highlight of early autumn for many.

Small and as fine as bouchots, they are ideal for Norman mussel soup, which also decorates a festive table.

If you are a fan of the gastronomic experience and happen to own a pine grove and a plank made of the wood of an olive tree, you will probably be more interested in Éclade.