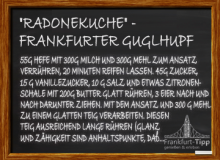 Stir 55g yeast with 300g milk and 300g flour to make the mixture, leave to mature for 20 minutes.Mix

45g sugar, 15g vanilla sugar, 10g salt and some lemon zest with 200g butter until smooth, fold in 3 eggs gradually. Add the mixture and 300g flour to make a smooth dough. Mix this dough for a long enough time (shine and tenacity are clues that the dough is worked enough) then fold in 300 g sultanas and 75 g currants.

Pour into a buttered 25 cm diameter sponge cake tin, which can be sprinkled with almonds to taste. Leave to rest until almost doubled in volume. Then bake for about 1 hour at 200°. When cool, dust the cake with icing sugar.

With Waldemar Thomas at Kuchen-Hollhorst in Frankfurt

In 1930, the confectionery was founded by Jean and Henny Hollhorst in the Wertheim house at the Fahrtor. There, where the Römer opens onto the Main. When the venerable building was the only half-timbered house in Frankfurt's old town to survive the nights of bombing during the Second World War, the mother of the present owner of the confectionery could already look back on nine years of work there, having joined as a nanny. When the childless Hollhorsts withdrew from the business in 1954, the Anderlohr family took it over.

Manfred Anderlohr passed the master craftsman's examination in 1977 and today runs the confectionery together with his wife Bärbel and son Daniel. That he has mastered his craft is shown by the many certificates on display. The junior finished his apprenticeship as the best in the guild, attends courses diligently and generally gives rise to beautiful hopes, to which his commitment to the volunteer fire department Sachsenhausen contributes, which the family credits him highly.

Whoever passes by the pastry shop or has already sat at one of the tables set up in front of it (the interior is a standing room only café) may be surprised at the few cakes displayed in the window, and the counter is not exactly bursting with cakes and nibbles. It's not a huge assortment, but Anderlohr is proud to say that everything, even the rusks, come from his own bakery. He only buys in pretzels and rolls for the breakfast guests. Nothing will change; the "pikante Konditorei" however, so far represented with chicken breast and rice filled pies, Quiche Lorraine or asparagus tart, is to be expanded.

"We do not want to become bigger, but better", Manfred Anderlohr sums up his business philosophy. The Bündner Nußtorte is the current bestseller, followed by Bienenstich, almond cake, Sachertorte, the fruit cakes from the tray, Baum- and almond cake as well as three kinds of truffles. Unfortunately, Radonekuchen, the Frankfurt Guglhupf, has lost ground and is in danger of dying out, Anderlohr fears. In contrast to its Alsatian brother, the light-brown yeast cake from the Main is downright "light", containing less butter, no candied lemon peel, only raisins and currants.

Unfortunately, Friedrich Stoltze only says " . and Radonekuchen", which is all he reveals about the good piece of Frankfurt baking tradition. The market leader was unable to fathom the meaning of the name, which is pronounced in Frankfurt with a nasalized "o" . Nevertheless, the Frankfurt Guglhupf tastes at least as good as it smells and looks, best served with dry Gewürztraminer, another thing it has in common with the one from Alsace.