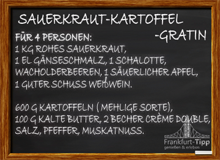 Melt the lard and sweat the finely chopped shallot in it. Then loosely layer in the squeezed, pulled-apart cabbage; press in the juniper berries. Then stir in the peeled, cored apple cut into small pieces. Pour the wine over it (so that the cabbage does not burn) and let it steam on a low flame for about three quarters of an hour, covered, so that it still has bite. Then drain in a colander and spread out in an ovenproof buttered dish.

Peel the potatoes and boil in salted water until done. Preheat oven to 220°. Drain potatoes, steam and press through a ricer into a bowl as hot as possible. Stir in the butter bit by bit and turn the whole thing into a thick sauce with the Crème Double. The quicker this is done, the less risk there is of lumps forming. Season to taste with salt, freshly ground pepper and freshly grated nutmeg. Cover the cabbage in the dish evenly with this mixture, and brown the gratin lightly in the upper third of the oven. Take out, let cool slightly and serve. Serve with lamb's lettuce.

Not a bad idea is to hide fish under the cabbage.

Pike fillets ("pike cabbage") or, no less delicious: salmon. Cover the fillets with the cooled but not ice-cold cabbage, spread potato sauce over them and gratinate under top heat. The fish cooks under the cabbage and stays wonderfully juicy. Additional: Stir in tomato concassée. Or brunoise of peeled peppers

A biodynamic mixed farm in Weilmünster-Ernsthausen

Naturally, sauerkraut is not the most important product of the approximately 220-hectare Demeter farm, which lies gracefully on the heights above the Weil valley between Ernsthausen and Aulenhausen. It all started with milk. When Rolf Radu and his wife Silke, a trained housekeeper who had moved from Frankfurt to the Hintertaunus region, started to farm biodynamically, their parents had to listen to a lot of derisive comments from the farmers. Milk, therefore layered cheese, then eggs, several kinds of bread from their own grain as well as sweet pastries followed; dried meat and sausages (excellent Leberkäse!) from the meat of their own cattle and pigs were added, not to forget the feathered fowl. As expected, the Radus do not have any sales problems; it is, however, difficult enough to supply all customers, among them several acquaintances from the market leader category, such as Terra Verde in Taunusstein and Hofladen 26 in Wiesbaden. With all the business Rolf and Silke Radu make a calm, relaxed impression, have time for conversations; at the big table in the kitchen friendly children play.

Whether they were so calm when the foxes had killed twenty-five laying chickens in the outdoor enclosure, however, remains to be seen, as it has its dear trouble with the poultry in general. Two fattening chickens badly mauled by the hawks in the so-called "hospital ward"are evidence of this.

The pigs, on the other hand, are doing well in the warm straw, as are the cattle in the airy loose housing, and even the sharp frost could not harm the leeks or the lamb's lettuce. Although potatoes sometimes do not thrive well in wet summers, the Radus are usually not that dissatisfied with the harvest.

In short: on the Rathsbacher Hof it becomes clear that a - for the conditions in the low mountains - large farm can also function well as a biodynamic mixed farm.

The little farm shop has grown over the years into a veritable health food shop, lovingly looked after by Mrs Silke, who likes to call herself a "shopkeeper". Once, when the white cabbage harvest was particularly abundant, they started to cut sauerkraut. They kept at it and presented it in jars, sealed with a rubber ring and clip, as pretty as it was functional. It is just as suitable as an attractive souvenir as it is for sauerkraut gratin. A winter dish in a class of its own, with or without meat. With fish even more so.