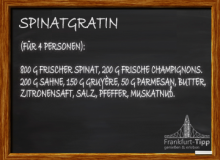 Wash spinach well and let it collapse dripping wet in a large pot on a hot flame. Drain in a colander and squeeze well. Cut the mushrooms into thin slices, fry them quickly in hot butter and season with salt, pepper and lemon juice. Whip the cream until half stiff. Now spread the spinach in an ovenproof, shallow, buttered dish, adding salt and grating a touch of nutmeg over the top. Spread the mushroom slices on top. Coarsely grate the cheese, mix with the semi-stiff cream and spread over the vegetables. Let brown on top in a hot oven and serve in the dish.

Good for home cooking as well as fine dining: spinach

The original home of spinach is Persia, where there is still a wild variety that people like to eat. Unknown in ancient times, it came to Europe through the Arabs. Spinach belongs to the goosefoot family and is related to garden almonds, chard, purslane, sorrel, turnip greens. Spinach does not contain more iron (2.2 mg/100 grams) than many other foods. Much more contain, for example, almonds (4.6), liver sausage (5.9), chocolate (6.7) or even pistachios (7.3 mg). Spinach could therefore only become a child's terror as a result of an error, or more precisely: a typing error: In one of the first analyses, a decimal point was accidentally moved one place too far to the right, which meant that the iron content, i.e. the health benefits, increased tenfold in the blink of an eye. As a result, generations of children were stuffed with spinach. Although the mistake was quickly noticed and corrected in the 1930s, the myth persists.

Thomas Wolff of the Bioland nursery "Querbeet" in Reichelsheim-Beienheim, knows about the tendency of spinach to accumulate nitrate. The organic gardener is keen to counteract this, as spinach plays a major role in children's nutrition. The nitrogen content of the previous crop is already important; too much of it increases the nitrate quantity in the spinach from the outset. This is because the Bioland guidelines only allow organic fertilisation, for example with castor bean or field bean meal, with a maximum limit of 50 kg of nitrogen per hectare. Organic gardeners are also well advised to sow in weed-free soil, as the use of herbicides is out of the question. Weeding and hoeing must be done, either by machine or by hand.

For Wolff, there is no question: spring or autumn spinach is the best. Because it grows slowly, its taste is more pronounced than that of the fast-growing summer spinach.

In contrast to many a health food store, where the greens lie limp and look just sad instead of healthy, organic gardener Wolff leaves no doubt about the quality of his vegetables. His spinach is harvested early in the morning on market day and, still damp from the dew, reaches his discerning customers as fresh as possible. Among them are many who appreciate this freshness even more than the label "organically grown". Wolff knows better than many colleagues that healthy alone is not enough; after all, he was the first to offer organic vegetables at Frankfurt markets.

Spinach has what it takes to become a veritable delicacy if it is prepared properly. True, the green mush with burnt yet half-baked onions is a thing of the past. On the other hand, there is a lack of effort in upscale restaurants to bring really delicious spinach to the table. Good for him who makes himself at home to a spinach gratin: with mushrooms, cream, Parmesan and Gruyère.