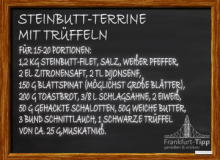 700 g turbot fillet season with salt, pepper, lemon juice and mustard. Clean and wash the spinach, blanch in boiling salted water and immediately place in ice water. Cut the rest of the turbot fillet into strips; soak the toast in a mixture of 1/8 l cream and the egg white to remove the bark. Steam shallots in 1 tbsp butter until translucent. Cut the chives into small rolls, peel and dice the truffles. Remove the spinach from the ice water, drain well and spread on kitchen paper. Wrap the seasoned turbot fillets in the spinach leaves. Grease 2 litre terrine dish with butter. Twist the soaked and well squeezed bread with the marinated turbot strips and the steamed shallots twice through the fine slice of the mincer, season with salt, white pepper and a little nutmeg to taste. Mix in chives and truffles, chill farce. Whip the rest of the cream until stiff and fold into the farce. Fill half of it into the terrine; push the mould several times onto the work surface so that no air bubbles form. Bed the turbot packets on the farce and cover with the rest of the farce, push open the form vigorously again and close with the lid. Cook the dish in a water bath in the oven at 100° for 1 hour. Take it out and place it overnight, covered with a small board and weighted down with a tin can, in a cool place on a grill. The next day, place the mould briefly in hot water and carefully turn it onto a nice plate. Bring the water with dill, lemon slices, caraway seeds and salt to the boil and let the lobster prawns steep in it for 5 minutes. Break out the peels, cut lengthwise (removing the intestine) and decorate the terrine with it and decorate with dill tips. Whip the cream until stiff, stir in the mustard and serve with the terrine.

The King of the Flat Fish

"Take the Butt and Leave the Flounder," says Theodor Fontane in a poem, and the better choice would be indeed. Among the flatfish, the bone-rich flounder (after dab and plaice) is considered to be the smallest; the delicate, often underestimated halibut reaches the most impressive size; but the turbot is rightly the most sought-after, even before sole. He's been called the Pheasant of the Sea. After the hard humps on its dark side, the eye side, which feel like little stones, the king of the flat fish carries his name.

In Venos turbot are alive or have been slaughtered. Whereby wild living from Holland and Scandinavia can be distinguished from bred from Spain only with difficulty. This is the opinion of father and son Kosmidis, who founded the company six years ago.

One has to know a lot about fish in order to taste the meat of a wild turbot as opposed to that of a farmed fish. The colouring of the skin does not say much, since it adapts to its respective environment.

The noble turbot is not a cheap fish, it costs considerably more than one hundred euros per kilo alive and from wild catch; already slaughtered is cheaper. In any case you get the whole butt and its supposed waste is good for some things. The market leader has never succeeded in producing a better fish soup than that made from the head and bones of a giant turbot!

The lean, fine, snow-white flesh of the fish remains firm enough for solid dishes, roasted turbot fillets with potato lentil puree and bacon sauce, for example. Beyond that there are a whole set of festive preparations and one of it, turbot terrine with truffles, one could mark oneself already times for the next festive cause.

Also afterwards reason exists to the attendance of the company Venos, approximately in January. Then the fish section will be rebuilt and enlarged in the style of a southern market hall. Venos' customers include renowned Greek and Italian restaurants, which find a full range of foreign food here, with a focus on southern European specialities. The company's best reference, however, was Japanese customers who, as is well known, do not compromise on the freshness of the fish. More and more private customers devoted to fine food find their way to Venos, Thomas Kosmidis can identify many cooking bankers among them.

And the family - the mother Croatian, the father Greek, the son grown up in Germany - wants to invite soon to an international competition in pizza baking. Against xenophobia.